When we were hit with Cupid's arrow, it was fired by the bow from Far Cry 3. There had been bows in video games before that, good ones too, but this particular weapon made the game for us in so many ways, transforming an unhinged open-world shooter into a pulsating hunt through paradise - and we were the hunters thanks to the deadly recurve bow in our digital mitts.

Far Cry is synonymous with the bow now, and for lots of us this one weapon pulled from a roster of many is the defining factor across the whole gameplay experience. That's not to say that we don't like wielding the odd sniper rifle, or sitting on a turret with a finger pressed down hard as a stream of henchman are taken down en masse, but for us these options aren't essential ingredients. Thus, when Far Cry Primal was announced, we weren't lamenting the loss of vehicles and grenade launchers, or even wingsuits, because we knew straight away that this game was going to be built around the bow, and thus we were happy.

So it won't be a surprise to hear that one of the first things we did after the cinematic intro was over, was check the upgrade options. There'll be a rapid fire option, a long-range "sniper" bow, there'll even be a double bow that'll let you fire two arrows at once. We can't wait to try them all out and master their ways.

Everything you use must first be crafted in Far Cry Primal, which makes sense given the prehistoric setting. Along with our hunting party we're on our way to reunite with our old tribe, but there's a little friction that ensures we'll be starting off as a lone wolf. We're quickly introduced to the basics, and that involves harvesting resources from the world around you, and fashioning them into the tools you need to survive. Before long we have a bow, arrows, a club, and a spear, as well as a healthy stash of materials for future use.

You can set fire to your weapons, and to the environment around you. Not only is a flaming club a helpful way of seeing during the night (when more dangerous predators come out to play), but it's also a potent weapon. You can even light the tips of your arrows should you wish, and we were also told of grenade-like projectiles to further modernise the neolithic arsenal at your disposal. This is Far Cry so we're going to completely excuse each and every historical inaccuracy, because Ubisoft is most definitely dabbling in stone age sci-fi with some of the weapons they're offering.

But it doesn't matter, because first and foremost Far Cry Primal honours the heritage of the series; it feels like a natural progression for the franchise, even if it steps back in time and loses some of the features we've grown accustomed to. Our first thought, when the game was announced, was that this release was going to be more akin to Blood Dragon than a numbered entry, but that doesn't appear to be the case. What is more obvious is the fact that the series has ditched the "lead psycho" and instead of an unhinged antagonist on which the game's narrative hangs, in Primal we've got two sharing the limelight, but neither character is as intrinsically linked to the overall presentation as we've seen in previous games. It's more about the mammoths than the madmen.

There seems to be increased emphasis on the wider activities that Far Cry players will be familiar with, although we'll have to see if this comes at the expense of story. In Primal we'll be expanding the map through exploration, moving the story forward by completing tasks for NPCs, capturing camps, building our base up to attract friendlies, and of course hunting animals and turning their skins into various fashion accessories. Most importantly the formula works in the new setting, and moments like taking our first trippy hallucination only further strengthens the link between Primal and the rest of the series.

Do we have concerns about the new direction the game is taking? A couple, but they're relatively minor. The main one is the owl. Via psychic powers you control a bird of prey that soars through the skies above, tagging enemies as you go. You see, you're the "beast master", and through your mental powers you're able to influence and tame the animals of the world around you. Is it a dash of fantasy that Primal needed? Judgement is being reserved for the final build, but we can't tell yet whether we like it or not. Beyond that, we're going to have to wait and see how the new-look Far Cry plays after several hours with a spear in hand. Might we miss the guns after all, or even the radio shows that play when driving in your (stolen) cars?

We played the first two-and-a-half hours of the campaign, but much of our time was spent hunting bears and engaging in minor instances discovered during our exploration of the valley we're trying to take back from both nature and opposing tribes. We didn't see all that much of the campaign, and while we're intrigued by the emotive performances of the characters and the interesting new languages they speak, we didn't have enough time to be fully immersed in the world and see the best of what it has to offer. There does look like there will be a lot of valley to explore, and from the small corner of the map that we were able to venture across, it does appear to be fully stocked with missions, side-quests, collectibles, and points of interest.

Despite the omission of multiplayer, we're still optimistic. After having spent many, many hours with the series over the last decade, our latest hands-on time with Primal has had a reassuring effect. We're not sure whether we're going to love Primal or merely like it, there's just too many differences and a couple of question marks hanging over it still, but this systemically driven open-world action game is certainly shaping up to be good, and we can't wait to play the finished thing when it launches on PS4 and Xbox in February (and on PC the month after). 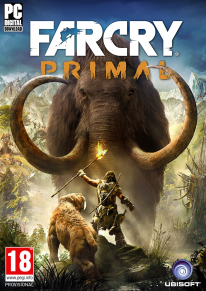