We're drawing closer to the launch of the next game in the Far Cry franchise, Far Cry: New Dawn is just around the corner and to pump the fans up before release on February 15, Ubisoft showed off some story bits and pieces in a new story trailer earlier today.

The trailer shows the desperation of the protagonists, as they are forced to make a deal with New Eden, to the dismay of one of the female characters, remarking that a deal with New Eden is a deal with the devil. New Eden's leader also seems surprised by the group reaching out with a "After all I done, and after all we've been through, you come seeking help from me? You must be truly terrified" - and we would chime in here saying we absolutely are. The blonde motocross gear-wearing twins from the trailer seem to be slightly more menacing than even Far Cry 5's antagonist family, showing off some brutal destruction skills. Check out the new trailer down below.

"Sh*t just got real. Face off against the ruthless highwaymen and their leaders the Twins as you fight to survive in a dangerous post-apocalyptic frontier. Form unexpected alliances, build a deadly arsenal of makeshift weapons and gear using the remnants of the old world to survive against all new threats. Far Cry New Dawn will be available on PS4, Xbox One and PC on February 15th, 2019" 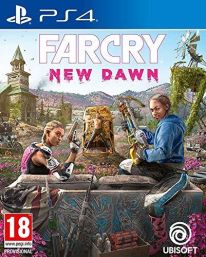