Ubisoft has dropped a bombshell and has revealed that both Far Cry 6 and Rainbow Six Quarantine have been delayed beyond Easter.

Far Cry 6 was originally slated for a February 18, 2021 release date, but it has been pushed back into the next fiscal year, which commences in April. Rainbow Six Quarantine, on the other hand, never received a formal release date, but Ubisoft formerly listed it as a 2020 release on its website. It's disappointing news indeed, especially coming off the back of hearing that Cyberpunk 2077 has now been delayed and won't be arriving in time for the PS5's European launch.

In a statement on Twitter, Ubisoft commented on the Far Cry 6 delay, stating: While we know you are all anxious to get your hands on Far Cry 6, we want to let you know what we've been given more time to allow us to make this game the game you aspire to play while focusing on the well-being of our teams in this unprecedented global context."

Are you disappointed by this news? Let us know in the comments.

The watch is an identical replica of the in-game watch, and there will only be 1983 units created.

The talented actor puts the spotlight to good news when he challenges his fellow Better Call Saul actor to become the franchise's best villain.

Ubisoft's post-launch plans don't just include villains from previous games and an improved Blood Dragon, but also some really interesting stuff for free.

And they're pretty reasonable.

It's over an hour in length. 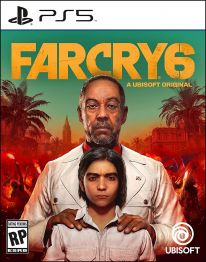