It's early morning when we enter the Far Cry 4 demo room in the Ubisoft booth at Gamescom. Excuses aside we die quite a few times trying to clear the first of two walled off missions designed to give us an idea of the variation we're in for in Far Cry 4. It's something of a stealth mission in the mountains. We use our wingsuit to decend upon the camp. First try we failed to deploy the parachute in time and die crashing into the mountain side. Next time we upset a yak upon landing and forced into action we're soon overrun by enemies.

The camp is your usual set up. There are a couple of alternative routes to scout the enemy positions and tag them with your camera. A chieftain, your objective, hides at the back and you have to take him out with your knife. To the left side there are some cliffs and you can use your grappling hook to ascend and gain a better tactical view of the camp. There doesn't seem to be the alarm mechanic here as seen in Far Cry 3, instead if you alert the guards they all come swarming in, or at least most of them. We mentioned the wildlife in passing. This time you can not only skin animals, but also harvest chunks of meat that can be used to attract predators and make your life a little easier in the mountains.

We started out talking about the wingsuit, perhaps the most notable addition expect for the elephant, but in this demo it felt fairly limited. Remains to be seen how freely we can fly around using the wingsuit in the full game.

The snow-covered camp was the first of two missions we sampled. At E3 they showed off a scenario with three distinct variations showcasing how players can use different tactics throughout most of the game. The two Gamescom demos however, showcased more of the overall variation in theme and gameplay as opposed to player freedom. The second demo took place in Shangri-La, the high-contrast spirit world (the look reminded us of Shadow Warrior) that certainly offers a different style of gameplay. The neat and useful Shangri-La bow and the addition of a partner in the shape of a Tiger makes it a nice break of pace, but it's difficult to see it as more than a sidedish, but one that offers plenty of combat and gameplay variation.

"Shangri-La was this idea if we're going invent a world, a Kyrat is a hybrid of Nepal and the Himalyas and Katmandu and places like that. If we're going to invent this place and make it feel real and solid. We also invented the mythology of the place. We like this idea of not just putting it on posters you know what I mean, or in statues, or shrines that you can visit, but also letting you play the myths and legends of the country. It's kind of a little alternative universe that gives you some of the backstory to our world."

Kyrat is a fictional place, a mix of Nepal, the Himalayas as a whole and the surrounding areas. It draws themes from actual locations, but makes no attempt to faithfully recreate a culture. A choice that is likely as much down to providing ample freedom when creating the gameplay as it is to avoid political controverse. Hutchinson says they want it "beliveable as opposed to real". Of course, setting your game in this area of the world with all the tension there is naturally leads to some controversy, whether it's a fictional place or not.

Previewing Far Cry 4 based on these two walled off demos and trying to give you an assessment of where the game is at overall is a bit like reviewing an icecream simply by trying the sprinkles on top. The open world experience is what defines a Far Cry game after all, and given the region we're now set to explore verticality is at the core of the experience.

"There are a lot of open world games now, so we try and make sure that our playground, the area you explore is as fresh and unique as possible. So when we looked at how we could go from the Rook Islands, of these beautiful tropical locations, how can we make it feel different and not just from Far Cry, but also from other open world games. We realised that generally verticality isn't dealt with that much. There's a lot of roads, there's hills and mountains, but it's sort of a slow incline and we thought if we added the gyrocopter, we added the grapple, we not only change the way you saw the environment, but also how you moved around."

Exactly how that plays out as the game opens up after the first half an hour or so of scripted events remains to be seen. What we can say is that these sprinkles makes us even more excited about what the full experience will be like. 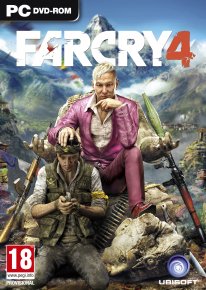