There's too much to tell you about Far Cry 3 to linger long on the game's roots. Ubisoft's first-person shooter is a fusion of the defining elements of both Far Cry and Far Cry 2. The lush jungle environments and linear storytelling of the first game have been mashed together with the open world exploration and sense of scale from the second. Ubisoft has cherry picked the best ingredients, thrown them together, and the results are nothing short of spectacular.

It starts with a jump. Friends falling and laughing. A skydive on a tropical holiday descends into nightmare. Captured by ruthless pirates led by a psycho arsehole called Vaas, your brother is killed in a botched escape, and your friends are all whisked away into captivity on the island. Vaas, after killing your brother, tells you to run for your life. You oblige; at once embarking on a brutal, visceral, beautiful adventure through a rich and compelling game world.

Your first new friend on this island paradise is Dennis. A fellow immigrant, he rescues you, provides you with cash to get your first weapon, and sets you on your way to recovering your lost companions. But before he does all that he gives you a tattoo - or at least the start of one - that is central to the Far Cry 3 experience.

The "Tatau" is the body art of the island's indigenous tribe, themselves at war with the pirates pillaging the local area, and throughout the game new skills learned are forever inscribed onto the forearm of our hero, Jason Brody. By the end of the game Brody's arm is covered in ink, an illustration of tests passed and trials overcome.

There are three different skill sets, represented on the tattoo as a heron, a shark and a spider. The heron represents long range takedowns and mobility, the shark focuses on assault takedowns and healing abilities, and the spider takes care of stealth takedowns, as well as basic survival skills. Players earn experience, which unlocks skill points to be spent on perks and skills in one of these three areas.

The player's character is pre-defined, coming in the form of an aimless and privileged twenty-something called Jason Brody. Like his forearm, our man is subject to a complete transformation during Far Cry 3's campaign, and by the time the credits roll, he's gone from being a thoroughly unimpressive jock to being a deadly hunter, a fearsome warrior and a general all-round bad ass. It's not just a physical transformation, there's a psychological element too. As Brody takes more control, his power becomes intoxicating. The battle doesn't just rage in the jungle, but also in the mind.

Back to Dennis, who assigns Jason with his first task: climbing a local communications tower. Once the creaking metal frame has been scaled the local map is revealed and the camera spins around to highlight some of the interesting locations in the vicinity. There are many of these towers dotted across the islands, and the lure of a detailed map is enough to make them worthwhile, however inconvenient and tricky they might be to climb.

Once tentative early steps have been taken, it's not long before Jason starts to collect some very useful skills; the ability to take out enemies from a variety of stealthy vantage points, increased agility, reload times, boosts to health. Soon Brody is a much more dangerous proposition.

A local doctor/dealer, Dr. Earnhardt, rescues one of the missing Americans, and a cave under his house becomes a hub to deposit recovered buddies once rescued. Using his mountaintop home - complete with spectacular island view - we explore outwards into the jungle wilds and deep down in the depths of our subconscious (via psychotropic drugs), as we hunt for any trace of our missing companions, which includes Brody's girlfriend Liza, and younger brother, Riley.

The urgency of the plot - rescuing friends from death and/or slavery - coupled with the rugged and exotic sandbox environment, makes Far Cry 3 a compelling experience. The themes explored here are exaggerated reflections of real life events still happening around the world today in countries like Somalia. The actions of the pirates and slavers is justification enough for the brutal revenge that they're subjected to through the course of the campaign. In short: they had it coming.

But before anybody can be saved and any revenge can be exacted, a few lessons need to be learned. The basic skills needed for survival are complimented by a range of crafting options. Syringes can be filled with all manner of concoctions designed to boost agility, increase accuracy, and of course, restore health. These can, however, be largely ignored. Much more important is the construction of your equipment. Whilst guns are bought in local stores, and earned through missions, the means to carry them are not available to buy, instead these things must be made. Want to carry more stuff in your rucksack? You'll need to kill four dingos, skin them, and then craft the relevant pack. Want an extra gun on your shoulder? You'll need to skin some sharks. As better equipment and increased inventory slots are needed, you need to seek out and hunt down new animals. It's a subtle way of making you explore the world around you, whilst keeping that exploration relevant to progressing the story.

The islands themselves are packed with detail. Visually speaking, it's incredible. We played on a mid-range gaming PC, and on full settings everything worked fine. The landscape is teeming with wildlife, some creatures idly grazing and others altogether more carnivorous. Sandy beaches roll into rocky hills that lead into forests full of lush vegetation. In short, it's absolutely stunning.

Audio doesn't disappoint either. The chatter of gunfire is satisfying when in combat, and the jungle soundscape exudes the same level of quality as is present in every other facet of the game. The game's main theme has a gritty industrial edge to it, pulsing notes with a twist of something more tribal. Jumping between cars switches the soundtrack, perfect for a pleasant sunset drive through an island paradise (with armored jeeps chasing after you, of course).

Whatever you primary mode of transport (are there are plenty of options, including cars, jeeps, trucks, boats, quad bikes and hang-gliders), dotted in and around the terrain are plenty of little details waiting to be discovered. A plane crash here, a sunken ship there. Abandoned Japanese WWII bunkers hide just as many secrets as the moss covered temple ruins. There's always something to investigate, with distractions easy to stumble upon when moving around.

On top of the campaign, there are a variety of activities that will keep you returning to Far Cry 3 long after the story has reached its sensational conclusion. Exploration uncovers plenty of hidden challenges and welcome distractions. Trials of the Rakyat are weapon-specific missions that can be completed for rewards, and there's leader boards for friends looking to compare scores. Path of the Hunter is similar, but has you hunting the local wildlife instead.

Using RPGs and shotguns to take on waves of enemies or animals - or other mini games like Supply Drop (racing from checkpoint to checkpoint) and Wanted Dead (taking down specific targets with a knife) - feels a little bit contrived when experienced within the larger whole, but individually they're entertaining enough pastimes for it to be worth taking a break from the immersive story.

There are also outposts dotted across the map. Each a puzzle waiting to be solved, players are free to approach each situation as they see fit. The sandbox gameplay comes into its own here, and you can tackle each encounter differently. Stealth and ranged attacks are legitimate options, as is going in with a shotgun and a grenade launcher. Want to make an entrance? Fly in on a hang-glider, approach under cover of water, or drive your car straight into the middle of their camp and get stuck in, it's up to you to be creative, assessing each situation and acting accordingly. It is this level of freedom that defines Far Cry 3, making it such an exhilarating experience.

Distractions only hold the attention for so long, and that's down to the draw of the brilliant campaign. There are plenty of highlights, from conversations with the alluring Citra, to a hilarious set piece played out to the Flight of the Valkyries. Along the way we stealthily infiltrate enemy strongholds (including one on a boat out at sea) and make daring escapes from heavily armed opponents with important data. The storyline is gripping, full of twists and turns, and delivers consistently.

Beyond the extensive single player campaign, there's also multiplayer (and a return for the much loved map editor). Matchmaking wasn't readily available pre-release, so we'll be covering the competitive side of Far Cry 3 here on the site very soon, but we were able to sample the co-op campaign, and it was great fun.

Up to four players team up and fight off a variety of different enemies in a mini-campaign that precedes the events of the main story. Four quirky characters are sold into slavery by their captain, and after escaping the ship and Vaas's pirates, embark on a mission of revenge. First experiences were undeniably gung-ho, as multiple itchy trigger fingers makes short work of stealthy progress, but there's a frantic feel to the action - that's both co-op and competitive at the same time - and it's a worthy addition to the package.

There's not many negatives to tell you about: Brody gets stuck on the odd step, there were a few graphical imperfections, a crash to desktop and a temporary loss of sound, but apart from that, everything is as you would want it to be. It's a game only held back from greatness by a few minor contrivances. Ubisoft has obviously taken great care in making sure that they've crossed all the t's and dotted all the lower case j's. There's so much content here, it's detailed, engaging, and for the most part it hangs together perfectly.

Whilst we can't yet comment on how Far Cry 3's multiplayer shapes up, or see how the multiplayer will fare in the face of well established competition over time, we can tell you that everything else stands up to inspection. There's an unbelievable amount of content here, with a campaign that'll take well over twenty hours to complete, and a plethora of side quests to conquer and collectables to hunt down. Ubisoft has delivered a delicious tropical sandbox of epic proportions, and you'd be insane to let this one pass you by.

"There's so much content here, it's detailed, engaging, and for the most part it hangs together perfectly."

All games collected in The Wild Expedition on PC, PS3 and Xbox 360.

Four developers in a sofa. 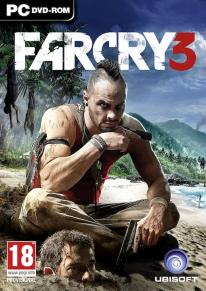