Ghost Trick: Phantom Detective released 10 years ago to critics' acclaim, but it flew under many users' radar perhaps as that was at the very end of Nintendo DS's life cycle, with the 3DS looming on the horizon just months away. Some would even say it's Phoenix Wright: Ace Attorney's writer and director Shu Takumi's finest story and game so far, as it included colourful and beautifully-animated characters, a catchy OST, an amazing storyline with great twists and, above all, one of gaming's best puppies in the form of the adorable pomeranian Missile. But if Capcom didn't give the well-known Ace Attorney the love it deserved, why would it give it to this niche game?

By a formal petition for a modern-platforms port, perhaps? That's what some fans put in motion a few days ago with this Change.org initiative.

This got an additional push as of late, mostly thanks to Ace Attorney and Ghost Trick's very own composer Masakazu Sugimori, who's sharing the petition on his personal Twitter hence encouraging other fans to partake in the process. Given his comments at the social channel, it seems that he's interested in this modern adaptation, and Nintendo Switch sounds like the most requested platform for the port.

The Phantom Detective on the case 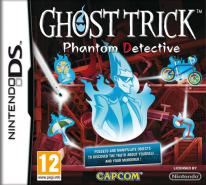