War may never change... but Fallout certainly has changed. It's been more than ten years since Black Isle Studios and Interplay put out the original and it should come as no surprise that as Bethesda takes over and brings us the third chapter a lot of things have come to change. For better and worse.

I'm not going to compare Fallout 3 to its predecessors, rather I'm going to look at where Fallout 3 stands compared to other recent role playing games. The story starts out simple enough, you have spent your whole life in a vault safe from the wastelands above, from radiation, super mutants, raiders and death claws. One day when you ahve turned 18, your father disappears. Turns out things were not exactly like the overseer had told everyone and your quest to follow in your father's footstep begins.

Fallout 3 is a very well written piece of interactive entertainment. The dialogue, story, and characters are well crafted and elevate the gaming experience to a level you seldom encounter. It is a shame that the facial animations are not up to the same standard as in Mass Effect as the work of the voice actors come across as rather poor when the animations don't match the voices. And while the dialogue trees are rather standard in their design, the dialogue available is very inspired in many cases. Perhaps this is the area where Fallout 3 lends most from its predecessors.

From a casual point of view Fallout 3 can be described as "Oblivion with guns". There is nothing wrong with that analysis, as many of the trappings of Bethesda's last offering are still present in Fallout 3. You will sometimes get stuck in the environment, the game will crash on you, the animations are poor especially if you try to play the game from the third person perspective (not advisable) and some of the inhabitants of the wastelands feel a bit bland and generic. However it should be pointed out that the quests in Fallout 3 are much more fleshed out, and that the world is richer in diversity even though it is smaller, there has been more attention to detail. The fact the level scaling has been toned down and replaced by a world that can sometimes be truly challenging at the early levels is much welcomed. There is also great variety in the weaponry, from baseball bats and sledge hammers, to missile launchers and Fatmen, grenades and mines, and of course the wonderful selection of homemade weapons you can create with the ingredients the wasteland has to offer.

As with many of the role playing games to come out over the last few years you're actions in the wasteland will be judged on a morale scale. And as I always do I tend to be good during my first play through. I know Petter Mårtensson played as a good person as well, all the while secretly collecting human body parts in his apartment. Sick little boy. In Fallout 3 there is every opportunity to truly be evil though. It starts with the option to blow up all of Megaton - the first wasteland settlement you are likely to stumble upon after exiting Vault 101, but how selling off people to slave traders? It seems the emancipation proclamation isn't all that relevant in the year 2277. Collecting the ears of the all the good people you kill is another way to prove your devotion to all things evil.

I played as a paladin during my first session. I spent most a few extra points on perception and agility, but had a fairly balanced character overall. There are plenty of ways to raise your S.P.E.C.I.A.L. stats including collecting bobbleheads, using a perk, or putting on special equipment. So while the decisions you make in the beginning of the game for your character are permanent, you can evolve your character over time. An example of this is that I chose to focus on small arms in the beginning, but as the game progressed I found that energy weapons fitted my style of gameplay a little better (and they become more readily available towards the latter part of the game) so I chose to up that skill instead.

While the main quest had a lot of very inspired moments some of the best experiences I had were with optional side quest and just random encounters as I explored the wastelands. I don't want to spoil any of the experiences for you, but I recommend that you take the time to seek out a few other vaults and find out the stuff that took place under the watchful eyes of Vault-Tec. The Oasis is also worth checking out... a small little quest that I really enjoyed.

The journey I took with Fallout 3 is one that I don't regret and one that I am likely to want to continue with downloadable content and a second play through. After more than 60 hours that is very high praise for a game I wholeheartedly recommend to anyone remotely interested in the wastelands of Washington, DC in the year 2277.

Gamereactor UK
+
Great story and characters, some superb quests, good gameplay mechanics, wonderful dialogue.
-
Too many bugs and glitches, poor animations.
is our network score. What's yours? The network score is the average of every country's score 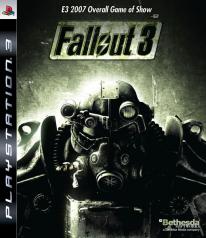