With the cancellation of Fable Heroes and the closure of Lionhead Studios you might have thought that the Fable series would not see the light of day again, at least not anytime soon. The franchise, perhaps best known for Peter Molyneux's many hard-to-keep promises, had been wandering aimlessly in a land full of spin-offs since the third game in the trilogy. The studio received criticism for Fable Heroes, the ill-fated Kinect game Fable: The Journey and, above all, the planned Fable Legends and its direction.

But when things looked as dark as the night, Microsoft made a surprising move in allowing a bunch of former Lionhead staffers to continue the work they had begun on a Fable card game as the independent outfit, Flaming Fowl Studios. Another spin-off to the main series of sorts, then. Flaming Fowl are likely to meet three different camps of players; those who still refuse to accept Lionhead shutting down and do not want to see the Fable series become something beyond a third-person RPG title, those who are happy to get a Fable game at all, and those who like to play digital card games and have no particular feelings towards Fable. Which camp determines the game's success remains to be seen, but for now, we can judge the game on its own merits and, in a nutshell, we've had a fun time with it.

The game's foundation is simple; like Blizzard's Hearthstone: Heroes of Warcraft it puts two players, alternatively one player and one computer-controlled character, against each other. Before the match begins, each of them selects each hero, all with different skills that can be used from the generated or customised deck of cards. The characters available are Marshall the Knight, Miracle the Alchemist, Crimson the Shapeshifter, Barter the Merchant, Temple the Gravedigger, and Sand the Prophet. Once players have chosen a character after having identified which hero best suits their game style, they can begin a match.

They both have thirty hit points and the objective is naturally to deplete the hit points of your opponent. To kill opponents, cards are used which also have a life meter as well as an attack gauge that determines how hard they can hit the opponent or his card and how much damage they can take before they turn into smoke. The start consists of a bunch of basic cards available for all heroes, as well as some cards created specifically for your chosen hero and these cards are played on the battlefield by spending gold coins (the Mana equivalent of Fable Fortune). Every round, the player is rewarded with an extra coin to use to expand their arsenal on the game board.

Like in Hearthstone most of the cards in the game cannot attack during the same round they are played, but the player can instead use various skills. No matter which hero you choose to play, you will have the opportunity to either hit an opponent or protect one of your own allies with a shield for a gold coin, which, from what we've seen in the world of Collectible Card Games, is unique to Fable Fortune. Another Fable Fortune exclusive aspect is the game's moral system. The Fable games have never forced players to follow a particular direction on the moral compass, ánd players themselves have always been free to decide if they would be good, the devil, or something in-between, and Fable Fortune is based on the same system. A predetermined number of times per game, the player can take on a task (these usually involve things like: play three cards, attack twice, and so on) and you can win these and get rewards with one of two special cards to choose from.

These cards have either good or evil karma and offer different bonuses. When the player chooses which one they want to keep, the hero's portrait changes to either a more beautiful or more nightmarish version of the original character and a moral meter begins to fill. If the player, after all objectives, chooses the same moral card several times, this meter is further filled and the player is rewarded with better cards and various improvements to their character. In addition to these rewards, some cards are converted to others which fit your hero better if they are leaning towards good or evil. Unfortunately, there are very few special cards and it would be more fun if there were more characters from the games.

Fable Fortune contains several different game modes to satisfy all types of players (except maybe arena fans), whether you prefer to be playing versus a computer-controlled character in a story mode or against other players, there's something here for you. There's even a rather novel co-op mode where players have to work together to take down an AI-controlled opponent. With that said, there is still a lot for developers to patch into the experience, such as more detailed descriptions for new players, an arena mode, and single-player campaigns for all heroes, to name a few.

Fable Fortune has a few problems, but the biggest issue is that Fable Fortune tries to compete with Hearthstone: Heroes of Warcraft, which is basically a better and much more fleshed out game with an already established fan base. If they would have taken the road CD Projekt Red went with Gwent: The Witcher Card Game it could instead have contributed to a more varied card game landscape, but Fable Fortune instead borrows almost all its basic ideas from its competitor.

Of course, this makes it really easy for those who have played Hearthstone to enter the world of Fable Fortune, but the question is whether they remain for enough time to make a difference to Flaming Fowl Studio's future. The only given audience is Fable fans, but it could be enjoyed by most people with the excellent music playing in the background, the wonderful character design of cards and heroes, and the very interesting moral choices.

Fable Fortune has the potential to become a big digital card game, if players give it a chance. It has a nice flow to it, it is charming and very... well... Fable. The fact that it is free to play helps, and it has a couple of unique features that card gamers will enjoy. The game is available for PC and Xbox One, so those of you who are fond of playing card games on console or PC (or just want to try something new between the Hearthstone matches) should definitely take a closer look at the new entry in the Fable franchise. 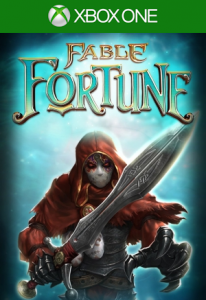