One of my favorite games from the 80's is the classic Excitebike for the Nintendo Entertainment System. It was originally released in 1984 in Japan and Nintendo made exactly everything work in a motorcross game that even those that normally have zero interest in motorsports fell in love with it. It had perfect controls, was ridiciously Nintendo-easy but still so challenging that I still play it a couple of times every year to shave a few seconds from my best laps.

Even though it had a career mode, the coolest feature was that you could build your own levels. With that feature, Excitebike longevity became more or less infinite and you could set the difficulty exactly as you wanted it. Sadly, Nintendo never managed to trump the original, but with Excitebike: World Rally they are trying to go back to the basics after experimenting with more realistic games like Excitebike 64, Excite Truck and Excitebots: Trick Racing.

Even if they weren't bad games as such, none of them managed to become as classic as the first Excitebike. Because of this Excitebike: World Rally is more or less a pure remake of the original title, with added online support and small tweaks that won't upset even the most fanatical Excitebike puritan. (like Jonas - translator's note)

One of the biggest news is that you can use your Wiimote to balance your motorcross during the biggest jumps. It works perfectly, but it feels pretty odd for someone that has is used to the old controls. Monster Games have prepared for this and in an attempt to not step on any toes, you have the option to use the original way of controlling your bike in the air if you prefer. Which I do.

The presentation in Excitebike: World Rally is, of course, a lot more advanced that its ancestor, with remixed music and an added world map. That's really just a graphical detail, because all jumps, slopes and obstacles are the same no matter where you are. Still, it's nice to have a bit more varied environments; they add to the feeling that you've actually beaten a track when you've reached the S-rank and decide to move on to next.

Excitebike: World Rally is a pleasure to play and it's just as easy and intuitive as its predecessor. The terrible computer-controller opponents have made the move over to the modern version as well, while they act more like obstacles than actual competitors. Which means that you can run them over, just like anything else that gets in your way. Other small improvements include an easier way to keep track of how close your are to overheating your engine and you get better feedback during the race on how you're doing.

Building your own tracks is as easy as ever and thanks to Wii's online capabilities it's simple to share your more or less impossible creations with your friends to see who will be able to get the best times. Racing online, with up to four players at the same time, works well as well; both against friends and random strangers. As usual on the Wii you can't actually communicate with anyone, which means that those random strangers could just have been bots in the first place.

Gamereactor UK
+
Awesome controls, great level editor, immersive, catchy music
-
No multiplayer offline, too expensive, cluttered graphics
is our network score. What's yours? The network score is the average of every country's score

Nintendo returns to their 8-bit roots in this remake of the classic Excitebike. 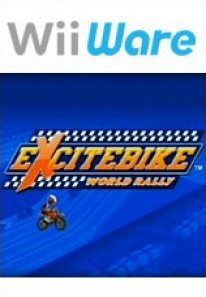