You might not be old enough to recognise the series name Evil Genius, simply because it was a strategy title that launched back in 2004, one that asked players to live out their wildest fantasy of being a world-class villain. However, you might have seen the announcement trailer for Evil Genius 2: World Domination that aired during E3 2019, back when the world was still relatively rooted in normality, showing a glimpse at what developer, Rebellion hopes to bring to the table with this iconic sequel.

As this is a true sequel, which follows on from where the 2004 cult classic left off, returning fans are very excited. To see how Evil Genius 2 differs from the original, we caught up with the title's lead designer, Rich Edwards, and producer, Ash Tregay to ask them a bunch of questions.

Gamereactor: There's obviously been quite a break since the first Evil Genius. Since this is a true sequel, what exactly was your main focus when creating a sequel that is both technologically up-to-date, but also pleases the returning fanbase?

Rich: We wanted to make sure we are playing to the power fantasy of that original game. We are asking you to be a villain, in a sort of guilt-free, evil setting. We are giving you the control of an evil genius and their tropical island and lair, and we are saying, go rule the world. You can act out any super villain fantasy there is out there, from recruiting an army of faceless minions, to building that ultimate doomsday weapon and conquering the world.

Ash: I think it's about taking a look at what made the heart of the original Evil Genius such a cult classic in the first place. Taking that forward, but then expanding and updating it both for modern expectations, and the expectations for it being a true sequel. There are a lot of really, really smart systems in the heart of the original Evil Genius but some of these aren't always presented in the most accessible way. So, making sure we are appealing to everyone who has that power fantasy of - I'd like to be a Bond villain, I think I could do a good job. That has been a core focus of ours.

Gamereactor: Talking about the very special missions you will send operatives out on to either claim gold or steal some unique loot. How vital are missions to the success of your lair?

Rich: If you want gold, you are not going to find an awful lot just lying around on your island. Whenever you are looking to make more gold or bring more resources back to the lair, you are going to want to send minions out to the world map.

Ash: Those schemes and criminal opportunities are the key way, you as an evil genius will interact with the world outside your lair. A lot of your focus is going to be on the forces and the counter forces working against you in the lair, but if you want to interact with the world, then schemes and criminal opportunities are the way to do it.

Gamereactor: How exactly does stealing unique loot play into this as well?

Rich: One thing we are doing is always making sure the player has options available to them in the form of side stories. These side stories make up a considerable amount of the campaign you can play, but they are optional. If you want to go and engage in one of these side stories, you can decide, you know what I want that bit of loot, and this is probably going to lead to something really quite cool, like the Statue of Liberty's arm for instance, or the Easter Island head.

Gamereactor: In regard to tourists, how do they wise up and start questioning that maybe this casino is a little more than what it seems?

Rich: If they spot something suspicious going on, for example, a couple of people are having a gunfight over a game of baccarat, they will immediately jump into a panicked state and flee that casino. The tourists tend to spot things that are immediately wrong and get very, very scared, very, very quickly. If they get suspicious, and if they spot something not quite right, they are going to flee your island immediately, and word might get back to the Forces of Justice that there are some pretty suspicious things going on in that tropical island paradise.

Ash: The civilians in Evil Genius 2 are not exactly the smartest people you'll ever meet, nor are the rank and file minions and agents either. It does normally take something fairly obvious for them to wise up, but gunfights and kidnap victims being escorted through the front, or high alerts and the doomsday device charging up, tends to be the triggers for them to understand the reality of their situation.

Rich: Ivan is our heavy metal mastermind, he has got an iron fist and he rules with an iron fist. He's very unsubtle and he does make sure he's got a lot of muscle minions to defend his lair at the drop of a hat. The other Evil Geniuses; let's take Maximillian as an example, he is the gold standard of evil. He's got the monocle, he's got the bald head, he is absolutely a great start for you to jump into the campaign with.

The other two Evil Geniuses are; Emma, who is an ex-spymaster. She knows the Forces of Justice almost as well as the Forces of Justice know themselves, and she's able to play much more into deception, making everyone think that everything is fairly normal over here. She is the person you want to play if you are going to try and convince everyone that you aren't that evil mastermind until it is exactly too late to stop you. The fourth evil genius is Zalika, who has a very strong focus on science. This is an Evil Genius who is capable of researching gadgets much faster and much more effectively than any of the other Geniuses, meaning people who choose Zalika will have a high-tech lair much more rapidly than any other Evil Genius.

Ash: Each evil genius has their own special ability, their own narrative campaign with their own story about it, and their own unique doomsday device, which has its own unique effects, both in the lair itself and on the world map.

Gamereactor: As the game goes on and you start increasing the numbers of levels in your lair, how does it become harder to manage the entire lair as a whole?

Rich: The first thing that you see when you start building up your lair to make it larger, is that there are plenty more places for agents to hide. Once you've got that initial lair set up on the ground floor, you can see fairly easily that that guy is probably an infiltrator because he is carrying a gigantic bomb, and is looking at the power station with a gleam in his eye. As soon as you start building that lair up over multiple floors, you won't be able to take as deep an interest in any single one part of your lair, so agents are going to be able to more rapidly slip by you the player. You can start using some of the automated tools (traps) that we give you to deal with that. They don't need to rest, they don't need to sleep, they don't need to eat, they will do nothing but stand a vigilant guard for any unwary agents.

Ash: We are introducing elements for mitigating the amount of attention the player needs to spend on any one level of the island as the game progresses. It is something that the player is going to want to do throughout.

Gamereactor: The doomsday device is sort of the endgame feature. Considering you can test it as the campaign develops, how exactly will this change how the Forces of Justice amplify their attempts to stop you in the long run?

Rich: You can use that device as freely as you like. Making sure you are using this when the time is right to fire it, is one of the core things we ask the player to do. If I'm going to fire my doomsday device and it's going to cause an awful lot of havoc on the world stage, I might not want to do that if the Forces of Justice are already watching me. As now, the Forces of Justice will be sending out investigators to probe my defences.

Ash: The Forces of Justice are large, international forces with a great mass of agents on hand to thwart your plans. At the beginning of a campaign, you are probably not someone they take terribly seriously, they are not going to send out their best people to get you, but as your threat level increases rather obviously over the course of the campaign, and when you build not just the first, but the second and third levels of your doomsday device, and you do start to become a truly global threat. Then they are going to take you a lot more seriously, planning countermeasures appropriately.

Evil Genius 2: World Domination is now set to release within the first half of 2021, following a delay to ensure the title meets the high-quality fans expect. So, unfortunately, we'll have to wait a little longer before we can expect to try our luck with the evil art of global conquest.

If you're looking for a chance to live life as a supervillain, look no further.

Join us for some chaos in Rebellion's new strategy title.

A Photo Mode will also be coming at launch. 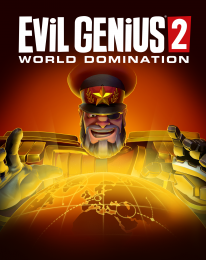