It's an even year, which means this summer there's going to be a big football tournament where some of Europe's best footballers will be showing off their skills and hoping to impress in front of an audience of millions. With this being the case, there's also going to be some digital football played alongside the real-world event. Last time EA grabbed the Euro license and served it up via DLC. This time around Konami bagged the rights, but the publisher is doing things slightly different to its long-time rival.

Most notably, Pro Evolution Soccer 2016 is being re-released with the new Euro 2016 content included on the disc. The retail edition will be heading to PS3 and PS4 - not Xbox or PC - and you can grab that from retailers soon (on April 21). The boxed version is actually just the base game, plus the Euro content, but it should be noted in bold characters that the same Euro content is available as a free download for PES 2016, so if you've already got the base game, there's no need to buy the Euro emblazoned retail edition. Beyond that there's also the fact that the Euro 2016 content isn't particularly substantial.

The Euro 2016 content was probably going to be DLC - pure speculation on our part - for this year's PES, but after Konami dropped the ball with regards to up-to-date player rosters (more on that series of events here), it decided that one way of appeasing the community would be to give them the Euro 2016 content gratis. Perhaps that decision meant that they didn't go all in with regards to generating new material, because what's here feels a little slimline.

For starters, there's no "road to Euro 2016" mode, so while you can play the tournament itself, you can't simulate the qualifiers, which would have surely made for a nice addition, especially considering how much lead time there is before the tournament starts in earnest in June. That means we're left with a bunch of teams (some are fully licensed, others, for reasons unknown, aren't wearing official shirts), a solitary tournament mode, and some Euro-themed livery. There are, to be fair, some online events that will tie into the tournament while it's happening during the summer, but they're a ways off and who knows exactly what we'll be getting.

The squads themselves don't seem to be particularly up-to-date (a familiar story), so - and we can't really speak for other European teams - there's no Dele Alli in the default England squad (you'll either have to start editing squads in the options menu, or make do with the dynamic duo that is Fabian Delph and Jonjo Shelvey), which you can understand given his late rise to prominence, but after what happened with PES 2016, you would think that Konami would do everything possible to ensure that the teamsheets were a fresh as possible.

Interestingly, there are some additional teams thrown into the mix that, although they didn't make the cut and qualify for the tournament proper, are still playable here. How and why these particular teams were chosen we have no idea, but if, for example, you wanted to take Denmark to the finals (especially after they were so cruelly disposed of by local rivals Sweden) you can. In one of our play-throughs we did exactly that, and thanks to the undeniable brilliance of future Ballon d'Or winner Nicklas Bendtner, we were able to bring unlikely European glory to the land of the Danes (you could of course say "never in a million years", but those of us with long memories still remember Euro 92).

Ultimately, the Euro 2016 mode for Pro Evolution Soccer 2016 is a simple reskin of the base game, with some official squads and tournament-themed decorations. Data Pack 3.0 added nearly 200 new player faces, as well as hundreds of tweaked players attributes (and don't forget the official match ball and Konami's recreation of Stade de France).

As you might have noticed by the tone of the article up to this point, it's fair to say that we weren't particularly overwhelmed by the offering. On the bright side, it's totally free (unless you don't have the game already and decide to grab a copy ahead of the real thing in June/July), so it's hard to be too critical of what Konami has offered up. Especially because if you wanted to, you could go into quite a bit of detail in terms of the management of your squad.

It's even more troublesome to be overly negative once you get playing, because as per usual, Pro Evolution Soccer offers up supremely playable digital football. We're not going to waffle on too much about what an excellent game it is, but there's genuine fluidity to the action, and an ebb and flow to the action that facilitates inventive play and moments of jaw dropping brilliance. The AI is solid, but it's in multiplayer that the game comes to life and matches FIFA 16 in every respect (here you can have 24-player tournaments too if you want).

Yes there's less in the way of official licenses, and yes the UI is archaic and in need of a complete overhaul, but this is still a very good football game, and the addition of the Euro 2016 content fleshes out the package and brings additional value to the table, just in time for this summer's footballing extravaganza. The new content is not as deep and far reaching as it could have been, but at least it's free, and with new online modes promised to land just in time for the tournament this summer, it should provide fans of the sport with something topical to get their teeth stuck into in-between the games played in France. 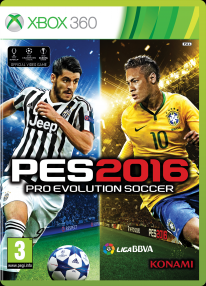