For the four hours after it was announced at Sony's conference, the Escape Plan booth at the aftershow lounge wad rammed four-deep with journalists clamouring to see this PS Vita title. To put that in context: it beat out even the gathering around the new Resistance game.

Escape Plan is due for a launch title on Sony's handheld. It's been a year in development from Fun Bits, the studio that brought you Fat Princess, a rough idea mapping and growing with the PS Vita's unique control aspects.

For those looking for easy digestion, its a mix of Limbo, Lemmings and as the developer pointed out, Lost Vikings.

You control either Laarg or Lill (physicality coined in name), or both, as you help direct them out of their containment to freedom, and you feel, the promise of cake.

You haven't direct control over the two, instead suggesting direction by a swipe of the touch screen. In fact the game plays almost exclusively to the touch sensors on the front and back of the machine.

Each character has a special ability, Sweeping your finger down or along Laarg come a crack in the floor or wall will make the behemoth slam through with shoulder or buttock. Lil can inhale air from pipes to swell up and float through exits in the ceiling, and pinch him between your fingers using the front and rear touch sensors to literally fart the air out of him.

During his float you can also tilt the console to help aid his direction rather than swipe, and pinch and pull the screen to zoom out or in, rooms , and the death traps within, increasing in size and complexity. There'll be fifty plus in total come release, split between four environments, from prison, through factory, into sewers and onto a workshop.

They're littered with traps and minions. While the game looks like a 2D platformer, it's got a depth of field that allows you to knock objects such as boxes and trap doors out of the way with a tap to behind or in front of the Vita. A performance that vital for survival. The games goes Metal Gear when you tap on a wall to attract the attention of a minion guard, and use his bumbling confusion to walk him right into a trap. Necessary, since the two characters are easily explosive and force a reset to the room start if you let them die.

A drop through a floor into the room below requires you to knock down a mattress in the background to give your two a comfortable landing, while a electrified floor need covered with lid. You'll find that, along with other lifesaving platforms over flesh-blending fans, are on strict timers, requiring quick finger swipes to correlate safe passage. Your interaction with the world is pretty wide - you can knock out bulbs, pick up collectables, rearrange the output of electrode chargers...all with the touch screen.

The characters and style are a big attraction. The stark greys and blacks show up well on the handheld screen, and for two that barely talk, Larrg and Lil are expressive - Lil noticeably sags the shoulders whilst walking, Larrg uttering happy musings while striding.

The studio have approached the hardcore undertaking of clocking the game without dying in a unique way that's also a permanent middle finger to those wanting their walkthrough unblemished. Each character is emblazoned with a massive number on their chest, which increases with each death. N more hiding a poor run on a stats screen.

It's good to see a title that's markedly different from the current crop of launch titles - more so that it's an original rather than remake, or cashing in on a known licence. The hook may be familiar, but it makes it no less intriguing. We recommend you check it out come release.

PREVIEW. Written by Gillen McAllister on the 17th of August 2011 at 15

"You control either Laarg or Lill (physicality coined in name), or both, as you help direct them out of their containment to freedom, and you feel, the promise of cake."

Thank you for your time. We will take care of this matter as soon as posible
Lemmings was also the first game to come in mind with this game.

Like the art style of this game, but I hope there would be at least some colors there and there to bring nice contrast.
>_> 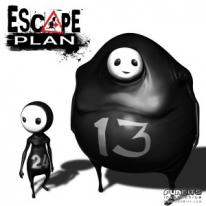