As we're playing Escape Dead Island we get the impression that someone at Deep Silver must have truly fallen head over heels in love with Spec Ops: The Line. Not only did they snap up the developer to work on Dead Island 2, but this game, Escape Dead Island, appears to have been clearly inspired by Yager Development's desert warfare antics as we're continually questioning what's real and what's not.

You are Cliff Calo, self-proclaimed douchebag and rich kid who takes to an island called Narapela with a couple of college friends in the hopes of breaking the news story of the century about a heartless bio-tech company and a genetically modified zombie virus. They find their story, but as the name of the game implies, things quickly take a turn for the worse, and journalistic ambitions are left on the wayside as survival takes precedence.

Additionally there are sequences that turn out to be dreams - that at first appear to be part of the same reality as the rest of the events that take place. The game plays with this and a lot of time you're unsure of what is real and what is either a dream or an illusion.

To avoid any spoilers we won't reveal anything else about the story, other than that the mystery was so captivating that we're currently replaying the game to catch all the subtle nuances. We're still not sure exactly what was really going on, but we're unsure in the best possible way.

Unlike other Dead Island titles, Escape Dead Island doesn't feature a sandbox world or RPG elements. It really doesn't resemble the rest of the series in terms of gameplay mechanics either. There's no weapon crafting (and thankfully no weapons that break from being used either), no character progression, no skill trees, no side missions.

Instead we're treated to a linear action-adventure in the vein of Tomb Raider or Uncharted - but with completely different production values and no climbing. You make your way through the landscape to clearly marked objectives, looking for objects, stealth killing zombies or engaging in direct combat with a mixture of weapons that include axes, katanas, pistols and shotguns.

For the most part it is well crafted, but in some areas it leaves a lot to be desired. You can tell that the game has been developed on a strict budget as most surroundings and set pieces are heavily recycled. There is hardly an area in the first half of the game that isn't revisited in the second half.

What's worse is that the combat system has issues that simply cannot be ignored. Sometimes we weren't able to switch weapons. In frantic combat that is a major issue as ammunition is a scarce resource, and you cannot afford to waste any bullets unnecessarily. But several times we experienced that as we tried to shift from the gun to the axe in order to take out a zombie that had gotten up close and personal, only to fire shots into thin air.

You press the button, the interface indicates that you have chosen another weapon - but you still find yourself using the previous one. This isn't facilitated by the fact that it's not always apparent what weapon Cliff is currently carrying, as it is hidden after a short period of time out of combat.

The last sections of the game are heavily combat-focused to such a degree that you run from battle to battle without any intermissions and this is when the flaws of the combat system become painfully obvious and frustrating.

It doesn't help matters that Escape Dead Island constantly has its checkpoints placed just prior to cutscenes that you can't skip over. If you happen to die, as a rule you'll then have to see the same cutscene again (and if you die repeatedly, over and over again). While they are rather short they hold zero interest after the first time you've seen them. You also typically have to fight your way through 3-4 groups of zombies before you're at the spot where you last died.

The visual style is clearly inspired by comic books, something that likely was a choice driven by practical concerns like budget and team size. But that is of little consequence as it works wonders and in spite of stiff facial animations - the choice of artstyle really makes the most out of the game. During the most psychedelic sections it must have been a blessing for the designers to be able to do something radically different that still fits within the art-style.

Escape Dead Island could have been a much better game than it ended up being. With a weapon system that worked at all times, better checkpoints and slightly better tuned balance when it comes to difficulty - this could have scored as high as an 8. And that's all down to the strength of the story.

There is a nice balance between ambition and ability here, and one can only hope that Deep Silver and Fatshark patch the worst issues that plague the game. As it is now the game only barely deserves a passing grade. You have to be able to look past some design problems in order to enjoy the captivating story that's there.

Gamereactor UK
+
Exciting and mysterious story, Nice graphical style.
-
Poor checkpoint placement, Frustrating combat,
is our network score. What's yours? The network score is the average of every country's score 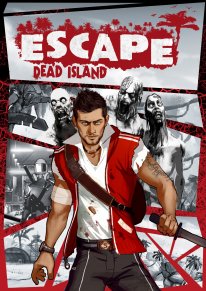