A controversial move, dubbed crazy by some Disney suits, but a move Warren Spector and his team at Junction Point Software felt was the natural route to take with Epic Mickey 2. And in all honesty, what is more quintessential Disney than musical numbers? Haven't they always been the highlights of Disney classics? It may not sway the Call of Duty crowd, but not every game has to take aim at that demographic.

"And don't worry, the songs are restricted to cutscenes and you can skip even if you'll break my heart," Warren Spector explains. "I've got lots of ideas for gameplay mechanics to go with that, but that's for a different project if this one pans out."

It's easy to be enthused. Not so much by Epic Mickey 2: The Power of Two, but there aren't a lot of game developer quite as charming as Warren Spector. He can really sell you on his concepts and if I hadn't spent half an hour playing an early code of Epic Mickey 2: The Power of Two after talking to him, I would probably have been extremely excited about the prospects of this game.

"Be gentle". Those were the words Warren Spector left us with as we proceeded to try the game on Xbox 360 (coded by Blitz Games) and Wii (Junction Point Software). And sure, it's still early days. Some games are developed in a way that makes early playtest rather volatile and unpleasant experience. Far from optimised, and with rather harsh bugs and some features missing. But we're opting to take a gentle approach. The different development teams working on Epic Mickey 2: The Power of Two have a long way to go until release, with lots of time to polish what's there and optimise the experience.

In one sentence, Epic Mickey 2: The Power of Two is a Disney musical with co-operative play throughout that lets players explore choices and consequences. Mickey Mouse is once again brought back to Wasteland, the land of forgotten cartoons, and he teams up with Oswald the Lucky Rabbit (now playable) to discover the truth behind a series of seemingly natural disasters that have struck Wasteland.

One mistake in the original Epic Mickey, Spector admitted to was the omission of voices. This time around all characters will be voiced throughout, and as an added bonus it allowed him to give Oswald voice for the first time ever.

"I was happy with the emotional level of the first game. This time it will be even higher," says Spector.

Warren Spector explained that at the last minute they were forced to take out consequences from the first game as focus group testing showed that young kids and non-gaming adults had a hard time grasping the concept of making choices that permanently changed the experience. This time around, however, all the choices and changes you make in Wasteland are permanent.

What genuinely seems to interest and excite Spector is the fact that he's been tasked with bringing back some of the forgotten and lost characters of Disney's past with the Epic Mickey games, but they're also inventing some new characters.

Oswald's new role as a playable character called for the introduction of his girlfriend Ortensia, something Junction Point had to invent as Oswald had a new girlfriend in each of his early cartoons. As an interesting side note we actually got to see a cartoon with Oswald found in the old archives that had been missing since 1928 (now there are 14 of Oswald's 26 cartoons that are saved for coming generations).

It offered some insight into what makes Oswald an interesting character to play as. Sitting on a train with a hungry hobo, Oswald was set on fire (to cook eggs), disguised as a monkey and more during the frantic five minute short. Decidedly less politically correct than anything I would associate with Walt Disney, the black and white unrestored silent clip had me laughing out loud several times.

Keeping in character, the playable Oswald is also prone to disfiguring accidents, and unlike Mickey who has his brush, Oswald wields a remote control that allows him to manipulate electricity.

Junction Point Software decided to make the game co-operative throughout, regardless of whether you play alone or with a friend. Split screen is there for those playing locally, and when you play alone you can switch between characters if you feel like it. It feels a lot like playing Little Big Planet with a friend or perhaps Lego Batman. You can help or hurt each other, and there are interesting mechanics such as Oswald's ability to use his ears as a helicopter and with this he can carry Mickey to ledges he would otherwise not reach.

"There are a couple of things I want to achieve with my games," Warren Spector, who has created 22 games in his career, explains. "One of them is to recreate the feeling I had when I played Dungeons & Dragons for the first time. You sit and tell a story with the other players, and you can totally disregard what the Dungeon Master is saying, go your own way and watch as he adapts.

"With Epic Mickey 2 we are taking small steps towards this," he continues. "You can choose to fight everything in the game, but you can also go through without fighting any enemies. You will always have options when you're interacting with the game world and the characters.

"At Junction Point we have this rule that we're never allowed to say 'the player has to do this'. When you've finished Epic Mickey 2 and tell a friend about your experience I want it to be different from the experience they've just had. Then I know we've won. There will be lots of events in Epic Mickey 2 that you've experienced and not your friend, and vice versa."

At this point Epic Mickey 2: The Power of Two has been confirmed for Wii, Playstation 3, PC and Xbox 360 with a separate edition being developed for Nintendo 3DS. Spector stayed mute on the possibility of a Wii U version, but he was wearing a smile when doing so (take it for what it is).

What should be noted is that the Xbox 360 version did look a full generational leap ahead of the Wii version in terms of graphics, something Spector attributes to the fact that no assets were recycled between the two versions of the game. Obviously, one balancing factor is the fact that the controls are more natural with the Wii version using the pointer to aim your brush/remote, but as it's not really a game where precision is a priority it felt fine using the right analogue to that effect as well.

Overall, Epic Mickey 2: The Power of Two is a promising proposition, and while the brief hands-on demo did disappoint a bit there were still signs that the project has enough potential to make the first musical video game a successful one. 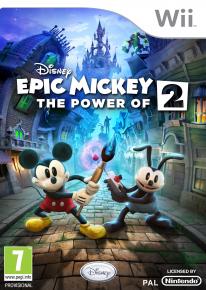