Disney has revealed the Epic Mickey 2: The Power of Two is heading to PS Vita sometime later in the year. The port will utilise the handhelds front touch screen for splashing paint around the game world, and the gyroscopic controls are being used for the racing mode. There's also to be two-player wi-fi co-op mode that'll be exclusive to the Vita version of the game. 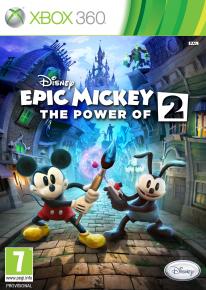