Dodge Roll's Enter the Gungeon is a game that fuses genres like dungeon crawlers and bullet hell shooters, and it turns out this combination has gone down well with players, as the game's Twitter account has revealed that it's surpassed three million copies.

House of the Gundead is coming to arcades this year, with Exit the Gungeon also heading to PC and consoles early in 2020, so the journey is far from over.

To remind you, Exit the Gungeon has already released on Apple Arcade, but will be branching out onto these other platforms after the initial launch in September.

As for House of the Gundead, this is coming exclusively to arcades, but custom cabinets can be ordered from Griffin Aerotech, as you can see on Devolver's site.

Have you tried Enter the Gungeon yet?

"It's easy to appreciate the attention to detail that has gone into every facet of the game."

Enter the Gungeon gets free expansion

Advanced Gungeons & Draguns releases on all platforms with lots of new content.

Enter the Gungeon rolls out on Switch

Enter the Gungeon hits Xbox One on April 5th

Supports cross-save and cross-buy with Windows 10. 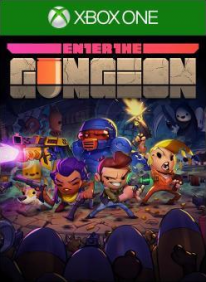