Everyone has an era in time they would love to go back and visit. Whether you'd fancy yourself as a medieval knight, a Greek warrior, or a groovy 80s discotheque-goer, the choice really is yours. For myself, I've always been infatuated with the roaring 20s and the period of time when gangsters were almost as well known as celebrities. Whilst I'm not sure I'd be the right material to rival Bugsy Siegel or Bonnie and Clyde, the latest title by Romero Games gives me the opportunity to have a crack at it, in the strategy title, Empire of Sin.

The main concept behind Empire of Sin is to build a successful criminal organisation in 1920s Chicago, eliminating or partnering with other rival mob bosses using a limited narrative system along the way. Since the 1920s in America was an era where alcohol was prohibited, creating an empire is a little more challenging, as you will have to keep prying eyes off your establishments, which largely utilise booze to rake in cash. There are opportunities to build other businesses, such as casinos and brothels, but alcohol is a pretty great tool for helping people part with their hard-earned cash, so you will serve it either way.

Considering Empire of Sin is an organisation building game, you as a player will have to use a combination of strategy and management gameplay mechanics. Essentially, the game is split into two different parts: Firstly is the management area, which defines the construction of your criminal empire, the second part revolves around combat that uses strategy systems. To a degree, it's almost like playing Civilization mixed with XCOM.

On the management side, you will be tasked with buying new properties and employees, subsequently also being required to upgrade them. For buildings, this could mean purchasing a brewery or a speakeasy for example, where the former would produce alcohol, with the latter selling it. By upgrading, you can increase the storage space or quality of booze, or likewise improve ambiance or security - making more people want to attend your establishment, in a manner that is safer from raids from opposing mob bosses.

In the personnel sense, you can use your cash to buy thugs who will assist your mob boss in combat. You can straight-up buy their services (granted they aren't cheap) and leave it at that, or you can also look to equip them a little bit, by heading to the black market to buy guns, equipment, and body armour - although due to the time period, this is basically just a waistcoat.

The combat itself is very much what you'd expect out of an XCOM-like strategy system. You have two moves (ability points or AP) per character during a turn, where damaging attacks usually cost one of the two. There is, however, a whole bunch of percentages that play into the success of a move. This could be tied to the range of an attack, accuracy of the weapon, or whether somebody is behind cover, among just a few examples. The point is, it's not just a simple point and click combat system, and yes, that does mean you can plant your machine gun barrel against an enemy's head and still miss the shot. It can be... frustrating.

The characters you get to play as differ, but only to a marginal degree. At the beginning of a game, you pick your mob boss out of a varied selection of recognisable people. This could be Al Capone or Dean O'Bannion and if you watch a lot of gangster-themed shows like myself, you'll probably already have a favourite before booting up the game. Each mob boss has their own set of unique abilities/skills to set them apart from the rest, which usually revolve around their style of crime and combat.

For example, Angelo Genna can use the Fan of Knives ability in combat to hurl a barrage of knives at foes: he also has slightly lower costing speakeasy upgrades and each brewery he owns comes with an extra guard. Essentially, the abilities are just added extras because they're aren't that significant to sway a character above the rest, unless you intend to play on the brutal hardest difficulty that is. As for the other playable characters, these are thugs who are part of your organisation, and aside from using them in combat, they are otherwise AIs.

The design of 1920s Chicago in Empire of Sin is an interesting one because it's split into a series of neighbourhoods that require fast traveling to move between. In a neighbourhood, you can control your character at street level (or in a building) from an isometric camera angle, or alternatively just play from the world map. There is no right way to do it, however, the street version does make the game much more immersive as you can feel the bustle of the city packed with pedestrians and rival gangs to a higher degree. Think of the neighbourhood system as a Civilization map where to move overseas, you must fast travel, instead of building and using boats.

Over the time I've spent playing Empire of Sin, I can safely say there's a lot to be excited for. The world is interesting and how the mob bosses interact makes it even more immersive. The narrative system, albeit a little weak, allows you to make your own decisions, making a game personalised. On top of that, the simulation aspect really spoke to me. I had a lot of fun building up my empire, managing my finances, and investing wisely, but, there are a few problems - some more serious than others.

First of all is the combat, which for anyone who doesn't live and breathe XCOM, or hardcore strategy, it will annoy significantly. Seeing a 76% chance of hitting would make any reasonable person comfortable with the chance, however, in Empire of Sin that may as well read 13%, because it probably won't. But, the bigger issue is the bugs. I have hit several game-breaking bugs that are either infinite loading screens, crashes, freezing, sometimes just issues that mean I can't progress a certain part of the narrative. Quite frankly it's disappointing because there were several occasions where I had to go back a few saves just to be able to progress the game. There is a day-one update planned that will likely fix some of these, but the sheer number I encountered meant I had to mention it here.

For what it's worth, I genuinely do like this game. I believe it has great potential, and what Romero Games has pulled together makes me excited for both its future and whatever comes out of the studio down the line. But, the bugs are a real killer, to the point where it's impossible to look past them. I find it difficult to recommend this game at launch, knowing that you could have several instances that stop progression entirely. Yet, with this said, if you are looking for a new strategy experience, Empire of Sin shows great potential, just know, it might come at a cost.

Advertisements
Gamereactor UK
+
Management mechanics are great. Characters are interesting. World of 1920s Chicago feels bustling and alive.
-
Combat can be frustrating. The sheer number of game breaking bugs are disappointing.
is our network score. What's yours? The network score is the average of every country's score

Load your Tommy gun and get ready to make your mark on 1920s Chicago.

Empire of Sin hits all current-gen platforms this December

Paradox opens up its pre-order purse.

Mafia tactics game Empire of Sin held back until autumn

Romero Games' Prohibition-era strategy title is being held behind bars until it has well and truly learned its lesson.

Brenda Romero on board game design influencing Empire of Sin

The team even held a sort of "pseudo-D&D session" when coming up with the ideas for a game in 1920s Chicago.

Brenda Romero breaks down all of the moving parts within Empire of Sin during our interview at Gamescom this year.

See the various facets of Romero Games' game, coming in spring of next year to introduce us to the criminal underbelly of Chicago. 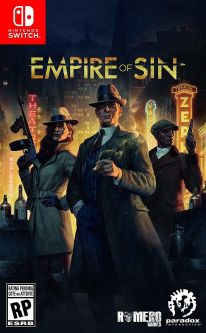