There are few games with as long and illustrious backstories as Elite. This isn't going to be a history lesson, but the series, and most notably the first game, have been hugely influential, and not just in the realm of space exploration, but also when it comes to sandbox and open-world adventures. So when one of the creators of the original - David Braben - took to Kickstarter to get funding for another sequel, the requisite funds were quickly obtained from an expectant community.

This isn't going to be a history lesson, just as much as it isn't going to be an analysis of the uproar among some following the decision by Braben's studio, Frontier Developments, to cut the planned offline mode ahead of launch, some crying foul at the developer's failure to deliver on their initial promise. All that we can do is look at the game that's been put in front of us, and judge that on its merits.

And merits there are plenty. The galaxy of stars built by Frontier is awesome in a way that few - if any - games can compete with. There's an incredible number of populated systems, and even more beyond. A whole galaxy awaits exploration. There's an almost limitless scope for future expansion and iteration. It's a hugely impressive achievement, and certainly worthy of considerable praise. Systems modeled (where possible) on real-world data are populated by colonies and space stations, with asteroid belts and moons making for additional details.

The systems might be impressive, but it's the traveling between them that's the star of the show. Controlling a ship - of which there are several different designs - is an art form, and there are so many elements to get to grips with, that piloting well is a player's first achievable goal (and it takes a while, even the tutorial doesn't cover everything you need to know). There are three speeds at which the game is played. Standard thrusters will get you in and around space stations, and it's at this speed that mining and dogfights take place. Then there's supercruise, which allows you to quickly move between planets and stars inside the same system. Finally, there's hyperspace, which is used when moving between systems.

Much of the game takes place while you're in supercruise, with you scouting the system for whatever reason. Other ships are depicted via a light blue glow, and from time to time you'll come together, and for a variety of different reasons. The handling of the ships is very well done; there are nuances to master, and in many respects Elite has more in common with games like Euro Truck Simulator than it does with space combat games like Strike Suit Zero (although you'll never get attacked by pirates when driving a truck down the autobahn). Much of the game is based around the repetition of docking your ship, scanning your surroundings, negotiating the same menus, carrying out the same actions with increasing finesse. This can get a bit repetitive after a while, but for many, that familiarity will end up being half the charm.

It's shifting between speeds, and when maneuvering your craft, that the quality of the audio comes to the fore. Frontier has made handling and controlling the various ships an absolute pleasure, and the hum and growl of your ship's engines is one of the most obvious illustrations of this. The immersion is bolstered thanks to the quality of the user interface, most of which is fully integrated into your ship's controls. Even switching between device (flight stick or controller) and keyboard feels natural and in keeping with the simulation. A lot of effort has gone into placing you in the cockpit and grounding you in that world, and that effort has paid off. This high level of immersion is reinforced by decent visuals. Space can feel very empty, but there's plenty of splendor to discover here and there, and who can deny the wonder of that first jump when your ship lands almost on top of a star, alarmingly close to its crackling radiant glow.

There's plenty to do, though perhaps not of all it is super interesting. What Elite does best is it offers a blank canvas on which pilots can play out their own individual sci-fi fantasy. Want to smuggle contraband or be a bounty hunter? You can do that. Want to hunt down slaves or mine for precious resources? You can do that too. You can even just study the markets and set up business as a simple trader, crisscrossing the galaxy in search of your fortune.

One criticism of Elite is that there's not a lot of depth within these potential player-driven character types. You can do any of the above (or a mixture of activities), but you can't do a huge range of different activities as yet. It gets a bit samey after a while, but as Frontier adds more activities and side-quests, this side of the game will only improve.

There's a story in there too, but it's harder to get at than you might imagine. Frontier is delivering regular updates that detail an ongoing political struggle across the game's main factions, with notable incidents mentioned via the website and in-game via the interface you connect with whenever your ship docks at a station. You can visit the places mentioned in these posts, and there are things happening there that you can involve yourself in (to an extent), but it's more backdrop than story, and it never puts you front and centre and it's not particularly easy to connect with other players. Until Frontier better facilitates a way for players to come together, it's fair to say that this is a game that will retain a certain kind of emptiness. Claims that you can "change the galaxy around you in an ever unfolding story" feel a little far-fetched, at least at launch.

So the story is basically a distraction unless you want to follow it closely and immerse yourself in it as much as possible. If you don't there's still plenty to do, and countless places to visit. On your journey you'll find untold distractions that'll have you deviating away from your chosen path; it's just a shame that a lot of these distractions aren't as meaningful or varied as perhaps they might be. We encountered the odd bug or glitch, but nothing game-breaking, however, it did feel slightly undercooked. This is most evident when you consider how much Elite needs fully integrated co-op, which is coming in a future update but has yet to materialise a month after launch. Currently, there's just the solo mode (that still requires an online connection) and the open world mode that lets you interact with other players, albeit in a limited capacity. More needs to be done if the emptiness of space is going to be conquered, and if Elite's community is going to be kept together and nurtured into something akin to Eve Online.

It's easy to envisage Elite: Dangerous being a better game with decent social features built in. Indeed, it's easy to envisage Elite: Dangerous being a better game full stop. That could be considered a slur, but actually, we've really enjoyed our time spent in the cockpit so far, and we've barely scratched the surface; there's much more to come and much more to be added. Frontier has crafted a space sim that stands alone in so many respects, and once they've finished adding and expanding their universe, a very good game could well end up being an absolutely incredible one. Our major regret is that the score at the end of this text can't be higher, because given the quality on show in so many areas, it really should've been aiming for the highest honours.

Gamereactor UK
+
+ Huge and ambitious, excellent audio design and user interface, decent visuals, high level of immersion.
-
- Couple of bugs still present, a little shallow in some areas, a lack of social features.
is our network score. What's yours? The network score is the average of every country's score 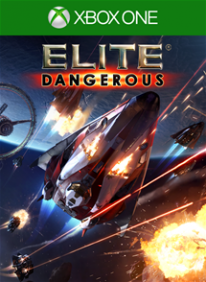