When you hear the premise of Elex, you'd be forgiven for being a little confused, as it combines fantasy and science-fiction together in an open-world game, something that's pretty unusual for RPGs. Normally developers stick to one side or the other, pick one, and build their world around it, but Elex throws that all out of the window in favour of a story that depicts the struggle between nature/magic against technology.

The game depicts a war between a number of factions as the land is divided by a substance called Elex which drives people power crazy and strips them of all emotion. When the protagonist, Jax, is the victim of a botched assassination, all the Elex drains out of him and he experiences emotion for the first time, meaning he must choose his own path from now on.

Choice is a key aspect of the game from the very beginning, as characters you interact with will make it clear how your actions affect their opinion of you. The game's a bit heavy-handed with this, with big signs saying "This character didn't like that" when you say something disagreeable, but it does have some nuance regarding how characters understand you. It's not just about whether characters like or dislike your behaviour, as there's also varying degrees of like and dislike, and you can also confuse people if your actions are a bit baffling and you sway from one stance to another.

Another key way choice fits into the game is regarding what faction you choose, and although you don't have to rush into a choice in this regard, it's a decision you have to make nonetheless. Again this was a bit heavy-handed when it was explained to us by the first character we met, but we can forgive that, as it seems like this just reinforced the point yet again that the choices we make in the game do have consequences, both great and small. Considering how ideologically different the factions are, especially regarding things like nature, magic, and technology, we can't imagine this choice will be an easy one, especially since your faction changes the way people interact with you.

As we started the game we were introduced to combat very early on, which we were told by producer Michael Paeck was inspired a lot by Dark Souls. We could see from the user interface alone that this was the case, as was the third-person stance and the unforgiving style (if you face an enemy that's a higher level than you, you simply have to get better and come back), but in execution it wasn't quite the same. Dark Souls excels because the combat is very smooth, but here we felt both the swings of our weapon and our character's movement rather sluggish. Even when we tried mixing up between heavy and light attacks we found the melee combat a little tiresome, especially since you could so often get caught in animations for attacks without any option to cancel them. These animations often looked unnatural, and there were also times when our characters slid around the floor in battle without moving their feet.

There's variety in the combat, however, and although we only got to play with a few melee weapons in the game, Paeck promises a lot more when the game releases, including guns as well, so there's something for fans of both sci-fi and fantasy genres in there. Considering that, when we talked to Paeck, he said he'd chose the Berserkers faction because he likes sword fighting, we're assuming the weapon choices will be affected by factions as well.

The scope of the game was also impressive. Paeck boasted that everything we could see we could reach, and this includes everything from snowy peaks to rolling deserts. Then there's also the more futuristic settings we've seen in gameplay footage with metal walkways and glowing neon decorative features, so the variety in terms of environments was decent. This scope extends to the game's length as well, as we were told that, with a reasonable amount of side quests, the game could take between 60 and 80 hours to complete.

The different environments looked great, as all the foliage looked polished, with extra details like sand blowing in the wind adding to the atmosphere. Armour and buildings looked particularly impressive too, but we noticed that the character models didn't look quite right, especially in the face. All the characters wore the same uninterested expression and the sync between their mouths and the audio was way off, so we hope these elements can be polished and tweaked before the game is finally released.

Because of Elex's size and scope, it didn't feel like we had seen a representative amount of the game during our time with it. Starting from the beginning, we only got to talk to a few characters and swing a few weapons, and didn't get to really feel the extent of the content around us, but from what we saw we thought Elex looked very promising. The combat was a little bit slow, but considering we didn't get to try a whole load of weapons, we can't make a solid judgement on that. In terms of size, scope, and the choice systems, though, we can only look forward to seeing what else Elex has to offer. 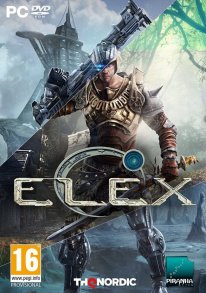