Pixpil is a studio from Shanghai, and they have been developing a role-playing adventure Eastward for quite a while. It is now finally made available for PC and Nintendo Switch players. Under gorgeous pixel graphics, there is a 30-hour interesting trip by train, where the design choices remind you of both east and west.

A miner named John lives with a young girl named Sam on Potcrock island, where they mine valuable metals and make sure that there are no disgusting snails around. These creatures are being taken care of by using a frying pan, but bigger and more humane problems can't be dealt with violence. Potcrockians don't have a kind attitude towards Sam, who is not a native on the island. Besides, Sam is also way too eager to see the outside world. John & Sam are being pushed into an adventure while traveling from place to place via train, and they get to know many places of the outside world.

As I said, the graphics of Eastward are something to look at in all its glory and weirdness. In the cities and dungeons more traditional pixelated graphics have an extra filter, and this self-aware retro style reminds me of Narita Boy. Old and valuable buildings have a dose of personalised graffiti and old neon signs. The soundtrack composed by Joel Corelitz reminds me of 1980's, and those tunes refuse to leave your mind even when not playing the game. This is a good thing, because Eastward doesn't have any real voice acting.

That is not a problem, because you are more than happy to follow the text-based dialogue. Story has many unexpected and surprising points, and they are usually commented by different NPC characters. The story starts a little slow, but the action starts right away. This means that the personalities of the main characters are not made clear until much later in the game. The story can be thorough at times, but still the plot progresses at a pretty fast pace. Game mechanics are not explained that well, and the story itself would benefit from moments of a slower pace.

For example, some of the dialogue scenes would have needed a more relaxing presentation. The camera follows the action from an upward angle, and then zooms too much to who ever is talking at the moment. This creates confusing moments every now and then. Luckily there is an option to replace speech bubbles with just plain subtitles.

Moving in dungeons is a bit of an uninspired affair with a frying pan. Enemies are being faced with John's pan and Sam's energy waves. Bombs are used to blow up fake walls and other obstacles, and simple puzzles force you to check those linear dungeons carefully.

Eastward's graphics are a sight to behold even in dungeons, which is always a good thing. The game works smoothly and without a hitch, but there is a bug in the Switch version's turn-based Earth Born mini-game. One time it got so confusing in the menus, that I had to restart the game in order to get out from that minigame. I assume that these small problems have already been fixed via a post-launch patch.

Eastward is clearly one of the better games of this Autumn, right next to Tales of Arise and Life is Strange: True Colors. If you are looking for a bit different and exotic role-playing experience, you should give John and Sam a chance.

Gamereactor UK
+
Audiovisual presentation is great, varied game world, interesting story, good characters, things to do and places to see.
-
Camerawork in the dialogue scenes can be confusing and restless, nothing new in terms of dungeon crawling.
is our network score. What's yours? The network score is the average of every country's score

REVIEW. Written by Petter Lundberg on the 19th of September 2021 at 13

Two miners travel to east, and it's fun. 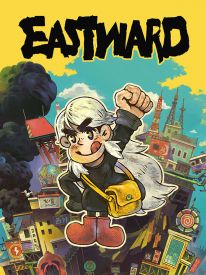