Prison Architect is still in Early Access on Steam, but it will finally see full release on October 6. The game has been in development for many years, but it has already managed to create substantial income for Introversion. Speaking to Eurogamer, the founding director of Introversion Mark Morris has confirmed that the game has sold around 1.25 million copies and made them $19 million for them.

Morris also goes a bit into their past and future plans. The company was on the verge of a collapse in 2010, as it almost went bankrupt. But then they came up with the idea of Prison Architect and everything worked out fine. The company currently employs 16 people, but they plan to expand a bit. There will be a dedicated team to continue supporting Prison Architect, while Morris and Chris Delay move onto another things. And next time it will not be about building prisons:

"Overall Prison Architect is a very good game, and it brings new ideas and a new setting to a tired genre."

You better grab it fast though as it's only free until this Saturday.

We've received a video of this mode in action.

Video games have violated the Geneva Convention for years

Prison Architect developers got a letter from the Red Cross.

The staff will now matter as much as the prisoners.

Developers move on to new things after 6 years. 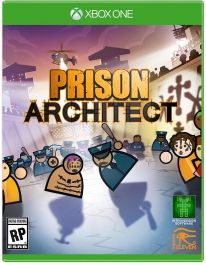