I still periodically play THQ UFC Undisputed 2010. Not because I love it, not because it is gorgeous or timeless, but since it is virtually the only one of its kind and ultimately does an acceptable job in simulating my favorite sport.

The developers behind THQ's UFC games, Yuke's, has long been criticized for its rigid, almost robot-like approach to both boxing like wrestling in MMA as well as the in the WWE games they've developed for several years. When it became clear that EA Sports would take over the UFC license and re-build every ingredient I started sweating in anticipation. The team behind Fight Night had, according to EA Sports boss Peter Moore, tossed on a pretty darn hard stranglehold on the world's fastest growing sport. And so began a long and anxious wait.

EA Canada commenced work in January 2012. From the outset, we had promises of the best looking visuals in a sports title ever, as well as a fighting system that'd offer an ultra smooth, seamless flow of different martial arts disciplines - was conceived. The first, pre-rendered, "target", the snippet of gameplay from the game that appeared in the late summer of 2012 was completely amazing. After that EA began to bombard us with regular photo packages crammed with impressive close-ups of the in-game models where everything from pores to beards were recreated with precision. Simply, things were looking good.

I'm writing this a few hours after finishing my second play session through the game, and nine hours into the title I can confirm that not only is the final result a disappointment, but this is a poorer game than the years-old UFC Undisputed in 2010.

To call mixed martial arts a difficult sport to successfully simulate would be an understatement of epic proportions. The sport itself is hideously complex and nicknamed "human chess" for a reason.

The most successful athletes in the UFC start are seasoned in boxing, kickboxing, grappling, a little judo, some ground karate and Thai boxing course. Big stars like Georges St-Pierre, Demetrious Johnson, Jose Aldo, Cain Velasquez, Jon Jones and Uriah Faber mix styles which ultimately creates an incredibly technical sport that is obscenely entertaining to watch and of course is almost impossible to imitate.

To develop a game system that allows the player to begin boxing and then, without delay, jump to a takedown and throw themselves into half guard and test various submissions, are substantially more challenging than creating a smart, straightforward game system (for example Fight Night's traditional boxing), and it's evident that EA Canada encountered issues in trying to develop UFC's system.

To begin with, the gaming system in EA Sports UFC is not just similar to the one Yuke's developed for THQ's UFC game, but is aside from a couple of negative differences, almost identical. The four main buttons control each fighters legs and arms while counterclockwise-rotating motions on the right analog joystick control the clinch, as well as wrestling and jiu-jitsu moments.

I was hoping that EA would attempt to develop a new system where adherence and button combinations would overcome the somewhat stilted system from the old games. Though I also (of course) understand that EA did lift the ground fighting system that's found in the rather unsuccessful EA Sports MMA, plagiarising Yuke's rather incomplete functionality is not the better choice. Especially when striking feels more rigid, lifeless and stiff than what's found in UFC Undisputed 2010. EA Canada should instead have picked out boxing mechanics from EA Sports MMA that felt softer, more realistic and had a more responsiveness.

When it comes to the clinch portion and wrestling in the game, I am greatly disappointed. Takedowns are unnecessarily cumbersome and after a while you'd rather skip the takedowns entirely and instead just hammer the right hook button. Once it reaches the floor, it's about rotating the right thumb like a savage then attempt submission via the mini-games that EA has chosen to include.

A symbol in the form of a bright red octagon appears on the screen each time you connect with a submission, and try and shift one of four gauges in the right direction. The idea's good, and it's right to structure this around mini games, but the execution is much too slow, lacking the excitement that comes in the real sport.

For those who are genuinely interested in mixed martial arts, I can't really recommend the title, and for fighting fans, the system lacks feedback and rhythm. For the lone player who intends to hammer their way through career mode, they'll find a sloppily put together mode which is hollow and monotonous. For those who intend gather friends round for some digital combat, the fighting is stilted stiff, rubbery and lack the accuracy required to offer longevity. The fact that it is perfectly possible to win by button mashing hardly makes things much better.

Those photorealistic visuals have disappeared somewhere during the development process. Early trailers and movie clips gossiped about a stunning next gen graphics and although the presentation contains all the details that are recognizable from the UFC's live broadcasts, we're not seeing the early promise on screen in the retail version. The lighting is flat and the animations clunky and rough. The difference between UFC Undisputed 3 for the Playstation 3 and EA Sports UFC for the Playstation 4 is shockingly little, despite the fact that Sony's new machine is many, many times more powerful than its eight-year-old predecessor.

Regarding the plus side, Joe Rogan and Mike Goldberg's wonderfully fickle, comprehensive and above all enthusiastic passionate work as commentators has to be commended. Although certain phrases are repeated, the commentary is some of the best I've heard in a sports game. It really feels like they're sitting in the next room while I play.

EA Sports UFC was not the complete, sleek, innovative, gorgeous simulation of my favourite sport as I had hoped. In the end, this is a pale copy of UFC Undisputed 2010, and lacks both the fine polish, personality and balanced game modes of that title. I'd have preferred if EA Canada had been given an extra year of development to correct many of the issues and add additional content. In it's current state, this debut is one of the year's disappointments.

HQ
Gamereactor UK
is our network score. What's yours? The network score is the average of every country's score 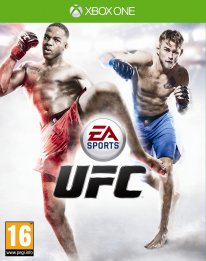