It doesn't help when the game's one that is hugely complex, as EA's first UFC title is.

The MMA (Mixed Martial Arts) is a sport that's continued to grow in stature across the world, entirely lead by the UFC (Ultimate Fighting Championship). You may remember frightening stories back in the 90s of the sport, but that's before Vegas brothers Lorenzo and Frank Fertita, and their friend Dana White bought the brand, implemented more rules to make it a real sport and marketed it with such passion that the sport's popularity exploded.

The passion that has served as fuel for the popularity of the sport is also energising creative director Brian Hayes, who has left offices at EA Canada for a few days to head over this side of the world and talk about the new game.

It's immediately obvious that he knows what he's talking about when it comes to the UFC, and before I know it, we are in a heated discussion about who really deserved to win between the American Jon Jones and Swedish Alexander Gustafsson as they fought against each other late last year.

That fight forms the basis of our first taste of the game. With dozens of hours spent on both THQ 's UFC Undisputed series (plus the game that we apparently all should pretend never existed, EA Sports MMA) the controls seem familiar from the outset .

The four controller face buttons correspond to an arm or a leg, while the power and angle of punches and kicks can be adjusted by using the left analog stick and shoulder buttons. All grappling , ie floor battle and clinch fighting, is controlled with the right analog stick and can be modified with the shoulder buttons. I'm a bit surprised when I first see the cat/mouse puzzle-like system that the developer has chosen to use in their submission system.

A small octagon-like icon will appear on the screen. You can push the analog stick in one of four directions, while the the defending player tries to predict the direction in which the attacking player will chose next. It seems, frankly, a weird way to visualise the submission system.
The battle between the two players, however, is not unlike the struggle seen in the real sport, where one mistake can mean the difference between a successful submission, and several seconds of wasting valuable effort.

Standing combat works better, and it's easy to tell how the devs have drawn upon their experience from the Fight Night games. There's an obvious weight to the characters, making each punch and kick that much more believable. However, it doesn't feel as if the mechanics guiding the fighters' movement has been adjusted, despite the fact that we're no longer dealing with a boxing game. Because there are so many different ways to attack, you'll often see a lot more movement in a UFC fight, but the game seems content focusing on two athletes moving around "in a phonebooth" as they're trying to hit each other.

Hayes repeatedly points out that a lot of effort has been spent to reproduce the fighters down to the last detail. He needn't have said: with the technical horsepower available in the new consoles, you now see how muscles move under the skin, which looks particularly impressive in slow motion. It doesn't seem like there's been only a few character models to choose from either. Instead, it seems as if each fighter has been an individual project in themselves, which has increased the level of detail significantly.

I have little doubt that Brian Hayes and his team are trying to make the best UFC game yet. There's clearly a lot of passion behind the early version we 've got to see the game.

But it also looks like a game that is far from being finished , though the plan is that it should be released later this year. You sense that the development time has been squeezed slightly; some elements seemed at least to be borrowed from EA Sports MMA, although they obviously have since been heavily modernized.

As a fan of MMA , I have on several occasions been burned in search of a game that could serve as a fairly believable, playable version of the sport. Therefore, I could not rule out that I unconsciously was extra critical to EA Sports UFC.

Therefore, the positive is that, the early code and the many imperfections notwithstanding, it's one of the games I look forward to immersing myself in when it is released later this year.

Also check out our GRTV interview with Brian Hayes about what he and the team are trying to achieve. 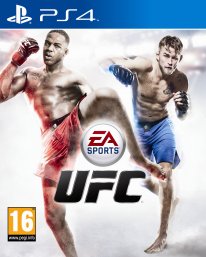