Chicago Blackhawks' superstar and recently named NHL 10 cover athlete Patrick Kane was recently arrested in his home town Buffalo, New York, for allegedly assaulting and robbing a cab driver. According to reports Kane and his older cousin got into a disagreement with the cab driver over the fare as he could not give them 20 cents change back on the 15 dollar fare (Kane has a rookie base salary, but with bonuses he can make several millions each season). Patrick Kane has pleaded not guilty.

The EA Sports cover curse has struck many athletes featured on various games from EA Sports. Most famously the Madden and NHL series have been hit with slumping superstars. But players getting injured or having an off season is far from the most spectacular cases of the curse. From the unfortunate dealings of Michael Vick to the Dany Heatley car crash that killed his teammate Dan Snyder the pattern is slightly disturbing.

We've laced the skates and hit the ice with EA's latest offering...

Can be downloaded on Xbox Live

Mostly menues and such...

Check out the next hockey season 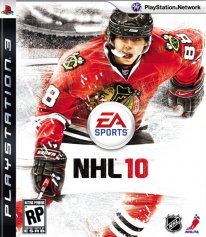