Last week, it was revealed that EA is "exploring the idea" of renaming the FIFA series, a move that was mentioned in a blog post that also mentioned it was "reviewing our naming rights with FIFA" suggesting that it might be ditching the FIFA name entirely when it came to branding the series.

Now, it looks like this move is already taking effect, as EA has trademarked the name, EA Sports FC, which does seem to suggest that 2022's FIFA game (which would be called FIFA 23 assuming no name change) won't actually bear FIFA in its title at all.

EA has yet to officially mention as to whether this will be the name of the next FIFA game, but all of these moves do seem to suggest that a change is on the horizon.

It's seeming even more likely that the next iteration of the franchise will look a little different.

He joins Tom and coach Zelonius in the team's new FIFA division.

Its boxed sales are down 35% year-on-year, however.

The scene will conclude with three postseason events in the Summer of 2022.

FIFA 22's soundtrack has been revealed

It includes artists such as Glass Animals, CHVRCHES, and Swedish House Mafia. 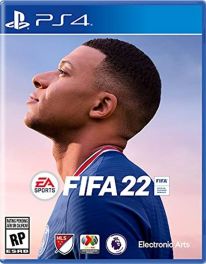