Lara Croft returned this E3. Twice. Though you have missed her second coming with the excitement of Rise of the Tomb Raider's announcement. We certainly did, only twigging when we walked into Square-Enix's press area that a sequel to the rather excellent arcade game Guardian of Light was not only green lit, but playable at the booth behind closed doors. While not on our schedule, we managed to wrangle a half hour appointment to see the game.

Now, most press appointment slots at E3 are a mystery as to their content. These are different than the show floor hands-on, those having you queue for up to an hour to play ten minutes of a game. Hidden behind the starship-sized screens and displays of most publisher booths are numerous pockets of small rooms, each housing a game representative, a TV and a few seats. These private areas are where select press get to see a different build of a game or even a new reveal, most being a hands-off presentation followed by a fight to get a interview in the few minutes before the slot's end.

Temple of Osiris was slightly different. We got a one-on-one appointment which had us slumming on a couch playing four-player competitive co-op with Crystal Dynamics staff, and (admission time) sipping on a beer supplied by the room's mini-fridge. It may have only been 11.30am, but it was the last day of the show, and the team argued they'd only crack open a cold one if we would. We give all too easily into peer pressure, but arguably this is how this side series is best played: friendly banter between friends playing local co-op (though you can play with online buddies as well).

Guardian of Light was the mini-project the studio developed as a pressure release from the strains of producing the unofficial trilogy of last-gen games - Legend, Anniversary and Underworld. It also showed the versatility of the Underworld engine, as an isometric camera tracked Lara and Mayan warrior Totec from overhead, as they explored and shot their way through multiple tombs and locations. The game leant heavily on its arcade inspirations, with waves of enemies and multiple traps to overcome, while trying to loot as much as possible to better your co-op pal's high-score.

Temple of Osiris keeps the template, but expands the roster to four, resurrected Egyptian gods Isis and her son Horus and another adventuring archaeologist, Carter, joining Lara this time round as they try and escape, and stop, an ancient deity. As before, puzzles and enemy numbers scale dependant on how many are journeying into ancient ruins, but the best experience isn't alone.

The two pairs have their own unique abilities. Lara's still got her grappling hook that can be used as a walkable ropeway over spikes for other players, or use it to pull up characters from ledges below. The two Egyptians can cast attack beams from their staffs, or project a glowing sphere around them that can be used to block arrows and let others hide behind, or as a platform to reach higher edges.

The competitive edge is still present however. While everyone will gain the same first weapon and loot to introduce players to the concepts, soon enough it's the first person to the collectable that earns the reward. There's an expanded upgrade system in place as well, letting you tinker with special attacks. Crystal Dynamics don't want you clocking one run-through and putting the controller down.

It's a new-gen and PC release only for now, though the team admit during a post-play interview (which will be on the site in the near future) that fan response will dictate if they look to other platforms for a port. As with its predecessor, the POV does little to lessen the intricate work the studio's put into defining characters and the environments. This is a lovely looking arcade title.

One issue we do have though is that even with the colour-coded circles under each character so players' can more easily track who's who, the increased chaos on screen during four player matches makes it all too easy at times to lose track of where we are. This is hammered home mainly during a final act escape through a trap-filled corridor as a titanic mythical beast gives chase, destroying the platforms behind us. Dust and debris roll from the screen's edge, and we lose track of our location, and so plunge to our death multiple times (at least there's a quick respawn).

The need for precision in both jumping over rotating spikes and rolling under barbed pillars also highlights the input lag that exists in the game's current form.

The latter we expect to be ironed out come our next bout, but as for the former, maybe a colour-coded outline around the characters may aid the issue, although perhaps a play longer than this twenty-five minute burst will allow us to adjust to everything on-screen and mark where we are a lot better.

Temple of Osiris seems to be the team's version of a breather between Tomb Raider's reboot last year and that title's upcoming sequel. The change of pace and game design seems to have invigorated the studio to create another arcade title that on this first play, seems as fun and as frantic as the first. The original Lara Croft lives on, and she's being served well by this side-series. Here's to her proper return in the (hopefully) near future.

REVIEW. Written by Fabrizia Malgieri on the 9th of December 2014 at 16

"After four years since The Guardian of Light, Crystal Dynamics released a new overwhelming chapter for Tomb Raider spin-off series."

Lara Croft and the Temple of Osiris free with PS Plus

Plus God of War and Stealth Inc 2.

Today on Gamereactor Live: Lara Croft and the Temple of Osiris

Two hours with the new adventure of the Tomb Raider hero.

The "co-opetition" of Lara Croft and the Temple of Osiris

We talk to Crystal Dynamics and bringing an element of competition to the four player co-op.

Lara Croft and the Temple of Osiris editions detailed

Lara Croft and the Temple of Osiris playable at Gamescom 2014

Lara Croft and the Temple of Osiris out in December 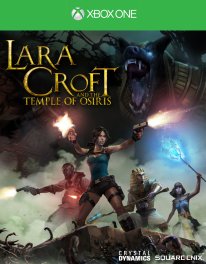