Imagine that you're out driving. Suddenly the hot supercar in front of you crashes and bursts into flames. Now imagine that trapped inside that burning pile of metal are your dear friends. The location is some remote desert, no rescue in sight, except that the car your driving is actually an ambulance and there are doctors and a trauma team sitting in the back. Would you save them? How could you not try? The analogy: Duke Forever was the supercar and we at Gearbox were the ambulance.

- Gearbox Software CEO Randy Pitchford, on the decision of getting involved with Forever.

Not many people actually know that Randy Pitchford, who's now running things at Gearbox, got into the gaming business when he first moved into Texas 1995 and started working for 3D Realms as a game designer. The task at hand was none other than Duke Nukem 3D. A few years later Randy decided to go his own way ultimately becoming one of the five founders of Gearbox in 1999. Thus he has had to follow Duke from the outside and wait anxiously for the little trickles of information just like the next guy. Year 2000 saw a new trailer released and things looked a better once again. The joy was short lived.

After a decade of ups and downs came the final blow. 6th of May 2009, 3D Realms announced shocking news: The Forever dev-team would become never ever, as the whole squad of 30 people were laid off. Over 30 million dollars and 12 years had gone to waste. The CEO, Scott Miller was devastated and so was Randy, after all the guys at Realms were his friends and as a gamer he wanted to experience the next great Duke-game.

Even though the company was no more and money was scarce, some men couldn't let go. They were unable to switch off. For those eight guys, Duke wasn't a work project - it was their life for the past years. Instead of scattering around and getting new jobs in the industry, they decided to continue struggling towards their ultimate goal, their lifelong dream. Working from their homes, the extraordinary eight were seemingly just delaying the inevitable, until the cavalry - the Gearbox guys led by Randy Pitchford - finally arrived. Nowadays those eight people, who according to Randy represent the heart and soul of Duke, work in key positions with a crew of 70 as a part of a new dev-team Triptych.

After a heartwarming introduction speech from mr. Pitchford we strap ourselves in for the climax: It was finally time to kick ass and chew... I mean play the demo. While staring the menu screen somewhat mesmerized, I get this bittersweet feeling that no matter how good the game actually is, my expectations were always going to be too high. But there's no backing out now.

The first part of the demo kicked off right from the beginning of the game, and when the first image you see - after 12 years of waiting, I remind you - is Duke taking a piss, it really sets the a unique tone for the rest of the session. After zipping my pants I experienced Duke and some police officers storming the football stadium and ultimately fighting their way through to the football field where Duke went head to head against a gigantic one-eyed monster. After the dust settles the scoreboard tells it all: Duke is in the lead. No surprise there, since as a finishing move mr. Nukem scores a field goal using the alien's eyeball as... well, a ball.

The latter of our 15 min demo time was spent in a revamped section of level 15. I had a chance to try out all kinds of weapons ranging from the trademark shotgun and The Ripper minigun to a shrinking ray and pipe bombs. The only new weapon that I saw was the Rail gun, a powerful one-shot-killer fitted with a precision scope. When asked about new weaponry the VP of Gearbox, Steve Gibson replied: "Yes, there will be new weapons and the Rail gun is one of those." Sure enough I tried to get Steve to elaborate, but no luck. We'll have to leave it at that.

In the midst of all the weapons testing, I got to try out a vehicle section. In the beginning of the aforementioned 15th level, Duke was driving a monster truck. Tuned with 4-wheel steering and turbo boost it was a fun trip, albeit short. Again I tried to extract some information out of mr. Steve Gibson about different vehicles in the game: "I can tell you that players will also be riding a RC-car while under the effects of the shrink ray", Steve replied. Whether we'll be able to commandeer flying vehicles of some sort, Mr. Gibson wasn't ready to give out any official word. But, I can tell you dear readers that for some reason or other, I have this gut feeling that we haven't seen anything yet.

Ever since the first appearance of Duke the 1980's style of one-liners and raw humor has emerged as one of the defining factors in the series. I can tell you that after a decade and a half, Duke hasn't slowed down a bit: From the "voluptuous" alien broodmother - with three of what can be described as breasts - to Duke with his final ounce of strength, after being bludgeoned by a gigantic monster, giving it the finger, the grin on your face never wears off completely. Steve Gibson explained that the one-liners are there to stay, but that the game would also contain a ton of more modern pop-culture references. Profit!

Amazing as it might be to finally - and I mean finally - play the game, I am not entirely convinced as of yet. Because in my books, gameplay is king. And as it happens, the aiming felt slightly inaccurate and controlling the movement was a bit dodgy. In Duke's case though, it's the über-macho attitude and the hopefully numerous wow!-factors that have to ultimately carry the game. Based on what I've seen and heard they will, after all the essence of Duke is something completely different than a competitive hardcore fps-game.

Good things come to those who wait, they say. But Steve Gibson, the VP of Gearbox had his own choice of words for our readers: "We were the studio that was on the right place at the right time. Everything that has happened with Duke, it's all a set of unbelievable coincidences, miracles really. Nothing like this has ever happened before and we are thrilled and humbled to be able to bring Forever to the gamers. It's such a big deal and we know it is. We feel the weight of the expectations and we're going to our very best to respect and honor the legacy."

John Cena to play Duke Nukem in the upcoming movie

Another Duke Nukem game? "I hope so", says Pitchford

"I didn't acquire the franchise merely so we could all experience Duke Nukem Forever," explains Gearbox boss.

Gearbox to respond with counter-claim.

The Doctor Who Cloned Me arrives on time.

Hail to the Icons Parody Pack.

The Duke gets DLC

Hail to the Icons Parody Pack. 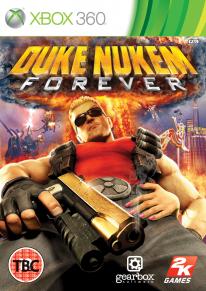