Back in August last year, Capcom suddenly removed WayForward's DuckTales: Remastered from pretty much all available digital stores. There was never a reason given for the move, making it impossible to purchase or play the remake unless you bought it in time or had a physical copy.

Right out of nowhere, however, Capcom announced that it has brought DuckTales: Remastered back to digital storefronts for you to purchase and download once again.

Just like last time, there's no explanation at all although it is speculated that some pesky licensing issues were to blame for the removal. "If you missed this gem the first time around, now's the perfect time to dive in," the announcement said. "Calling back to the golden age of 8-bit gaming and Saturday morning cartoons, DuckTales: Remastered features hand-drawn animated sprites that bring each character to life in a vibrant world".

And thus, DuckTales: Remastered returned to PS3, Xbox 360, Xbox One (thanks to the power of backwards compatibility), Steam and even the Wii U eShop. Unlike last time, however, there's no massive 75% discount, so you'll need to fork over £11.99 to experience some precious nostalgia. There's currently no sign of DuckTales: Remastered showing up on either the PS4 or Switch, however, so keep your goggles on in case that happens.

You can check out our review of DuckTales: Remastered to see what we originally thought of the remake if you're feeling tempted to relive or even finally experience Scrooge McDuck's adventure.

Are you hoping to head back to Duckburg for the first time or once more?

"While true nostalgics are better served playing the original on NES there has been a fair deal of love and effort put into this HD-release."

Capcom originally delisted the 1989 HD remake seven months ago, but you can now purchase it again on Steam, Xbox 360, Xbox One (via Backwards Compatibility) and even the Wii U.

This applies to digital stores, but if you've downloaded it already, you can still play it whenever you like.

The Himalayas of DuckTales

Xbox 360 players will have wait an extra month.

Director Ivansmith and producer Jimenez talk up the remake.

Capcom tell us how they're restoring a classic. 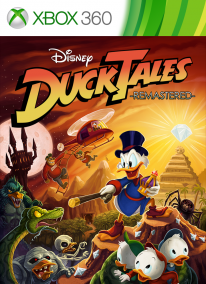 Shantae and the Pirate's Curse