Lasting impressions of the 2000 debut were great car handling and realistic damage.

Fenders would bend, hubcaps flew off and tires howled as they hung on for dear life, as Reflections Interactive drew on inspiration from the 1978 film of the same name. The first game focused on the essentials - the driving - and went down well with players and critics alike. Unfortunately the series dropped gear from then on in.

After three increasingly weakening sequels that have left the franchise losing that strong identity, a reboot was in order.

The new Driver kicks off in San Francisco with Tanner lying in a coma after suffering a near fatal blow to the head. As a result, the entire game takes place inside of the hard man's head. This opens up new possibilities for the developer and it gives the player the chance of hi-jacking the bodies of the drivers that populate the city. Apart from the driving, body-swapping is the most important game play mechanic found in Driver: San Francisco. And even if Shift, as its coined, initially raises doubts, the mechanics works much better than we had expected - and about a million times better than the unfortunate on-foot sections of Driver 3.

The best use of Tanner's out-of-body experiences arise during chases. While being pursued by hostiles Tanner's spirit can leap out of his body and upwards giving the player a bird's eye view of the action. A smart player can then pick a car driving in the opposite direction, jump in and drive into the oncoming cars. Unfortunately there is no hot key to zoom back in to Tanner's car, and instead we have to go back to the overview and manually pick out Tanner's signature black and yellow Mustang.

The body swapping procedure also presents you with menu options. When you're in your out of body state you can fly around San Francisco and look for the many mission triggering people or cars spread out in the city. In addition to the main story line there are tons of side missions and challenge to keep you busy. As a matter of fact, these side missions are pretty much compulsory as you need to complete a few in order to unlock the next story mission. Expert and novice drivers alike will net "power points" that act as the game currency, and with it you can add cars to your collection. The 1973 Ford Mustang is still our favourite, but there is a lot of choice to be had among the 140 vehicles found in the game.

That takes us to the core of the experience and the driving is very well executed in Driver: San Francisco. It mixes a slightly arcadey feel with the powerful and heavy vehicles and should keep both veteran and new players happy. As you would expect each car type handles very differently, and while the physics don't always hit the same standard, with the result of some awkward collisions and crashes, the overall impression is that Reflections has pulled it off. Most important of all is the that sense of the 1970's car chase movies has been retained with its heavy emphasis on skids and slides. And if you happen to be caught by the law, then it is usually your own fault.

Driver: San Francisco is a mixed bag for us. The body-swapping mechanic never really won us over and the story failed to grab us. We would rather have kept it a vanilla driving experience. Another issue is that the streets of San Francisco fail to provide us with enough variation. In total there are a couple of hundred missions, but there is a lot of repetition there even if Tanner's abilities offer us some interesting options when it comes to solving them.

Despite these issues we still enjoyed the time spent as Tanner in San Francisco. Visually its decent, and the audio is up to scratch with what you'd expect from an engine's roar. Overall the game is enjoyable, but is let down by tedium borne from repetition.

Once again, we're forced to conclude that the original Driver is still the best in the series, although Driver: San Francisco leaves the majority of its predecessors chewing on its tailpipe.

The multiplayer component of Driver: San Francisco wasn't available during our review. We'll be delivering our verdict on MP in a later article.

Gamereactor UK
+
Solid driving experience. A lot of missions
-
Too repetitive. Body swapping feels slightly gimmicky
is our network score. What's yours? The network score is the average of every country's score

REVIEW. Written by Eerik Rahja (Gamereactor Finland) on the 31st of August 2011 at 10

Driver is making its return in Driver: San Francisco, and we talked to two of the developers about what's new in the game and what lessons they learned from previous instalments.

Who better to drive GRTV through San Francisco than Reflections founder Martin Edmondson? Jump in the passenger seat for a talk through iconic cars, engines, and hopes for the title.

Familiar locales meet classic rides and a modern-day twist: exactly what's under the hood of the new sandbox racer? GRTV caught up with Ubisoft Reflections to find out. 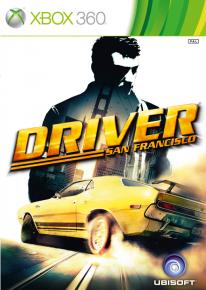