Here is a confession. I wasn't at all impressed with the first footage I saw of Dragon's Dogma. It came across as a slightly corny take on The Elder Scrolls series, and not at all what you'd expect from some of the most revered names on staff at Capcom.

But even if you could argue that Dragon's Dogma is just that - a slightly skewed Japanese take on The Elder Scrolls - the game showed enough promise at Tokyo Game Show for me to change my stance and open up to the possibility of a free-roaming fantasy action-RPG with one or two twists of its own.

The first thing about Dragon's Dogma that struck me is the pawn system. Rather than going for your predetermined set of heroes or down the road of co-operative play - Dragon's Dogma finds a middle ground that if nothing else should prove an interesting experiment.

Where having a group of character like you do in, say, Dragon Age was never really an option for Dragon's Dogma - the system of pawns allows you even more flexibility. The developers will cherry picked various player created characters to populate "your" Dragon's Dogma alongside a number of developer designed pawns. You then pick what characters to use, but you should not only be aware of their class and skills. Nope, their experience with the various enemies, as in whether or not they have fought a certain type of enemy before, also goes into the decision. As you would expect enemies have certain patterns and weak points and pawns who have fought a certain enemy before will go in to battle with that knowledge and thus adapt a better strategy and aid you better.

Much as in chess, proper management of pawns are key to your success in Dragon's Dogma.

The presentation at Tokyo Game Show was focused a lot on the character creation in Dragon's Dogma and there is a lot to play around with here. Naturally there are a lot of purely cosmetic choices - and as can be expected in a Japanese demo a lot of emphasis was put on your choices for the female avatar's bust - but there are also stuff like scars and tattoos - as well as make up (for both sexes). More interestingly some of your choices will affect gameplay, your height and weight for instance will affect your balance and there are also various stance choices.

The character creation demo was not just meant as a separate presentation, but it had an ulterior motive - as the developers used the recently created character to show that all the cutscenes are rendered real-time, impressive given the look and feel of said cutscenes. In the very first of the game we meet a girl, a childhood friend of the hero, and if you choose to be a male character (why would you when you can play around with bust sizes?) she can also be a love interest. The developers assured us there would be plenty of other love interests, both male and female, spread throughout the game.

There will be nine distinct professions in Dragon's Dogma - each with branching paths to evolve. We were given a glimpse of an evolved mage - a sorcerer - in the demo. Basically mages use mainly passive skills, buffs, and such, while sorcerers have more powerful offensive spells. The magic system in Dragon's Dogma is an another interesting area. Rather than going down the typical path of magical points or mana, the developers opted for a more skillbased system where the longer you chant, the more powerful your spell becomes. And after using a spell your character will become vulnerable for a short while. And if you're playing a mage or sorcerer, this means your pawn will play an important role keeping the enemies occupied while you chant or recuperate.

One thing that is interesting about Dragon's Dogma is that it's being described as an open world game, something the Japanese traditionally have been too keen on. Trying to delve a bit more into just how open things will be I asked the developers to try and quantify just how much time players will spend on the main story and various side quests and the reply I got was a bit cryptic. "We want to make it as free as possible - and the player may not even realise he is completing tasks towards the main quest when he's playing." It will be interesting to see just how open the world of Dragon's Dogma is.

Dragon's Dogma looks more and more interesting each time we see it. Now if only Capcom could do away with those ridiculous arm movements when the character is running, we would be even more pumped for it.

Thank you for your time. We will take care of this matter as soon as posible
I have a question. Will you not be able to develop a romantic relationship with a pawn? 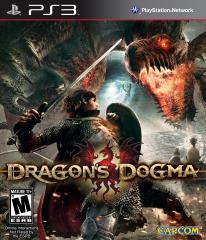