Square Enix's Dragon Quest is one of the big daddies of the RPG genre, Japanese or otherwise, but despite that fans have only been given a Nintendo DS game (IX) and an MMORPG (X) since the last single-player console entry (VIII) back on the PS2 in 2004. Of course there have been spinoffs like the popular sandbox title Dragon Quest Builders, but it's been a whopping 14 years since VIII, and while Japanese players have already got into Dragon Quest XI: Echoes of an Elusive Age as of last summer, us here in the west are twiddling our thumbs waiting until September 4 for our version.

In London recently we got to try the long-awaited RPG for ourselves, as Square Enix hosted a pre-E3 showcase that was dedicated to the western version of the game, showcasing two distinct areas from its undoubtedly massive world. As much as it was a limited view, our two-hour session granted a look into everything from the combat to the graphics and the different characters we'll be meeting on our journey, some of which may be old news to fans who have kept up with the Japanese version.

It's important to bear in mind, before we go anywhere else, that this is a standalone experience. "The Dragon Quest series has a history of over 30 years in Japan, but we always think seriously about the best way to bring the games to new players, as well as to long-term fans," producer Okamoto Hokuto said in the briefing we were given. "To this end, Dragon Quest XI was developed around the concept of being both a culmination of everything from those 30-odd years and a new starting point for the series and those yet to experience it."

The world of Erdrea in this game is, therefore, a self-contained package, so if you've been wanting to get into the series but don't want to trudge through years and years of games, novels, manga, anime, and lore, you're in luck. It's pretty simple in essence too, as the game revolves around you - the hero - being the reincarnation of the legendary Luminary, a warrior capable of saving the kingdom. It's your typical RPG premise then, and after our village is attacked by evil creatures we have to set off in search of answers in the kingdom of Heliodor. While we won't spoil details of what we saw, we will say that Square Enix says that this is the only hero's tale where the hero is actually persecuted by society for their gifts, which should offer an interesting contrast to previous games where people pretty much fall at your feet at the mere mention of your heroic deeds.

What's the difference between this one and the Japanese version though? Well obviously it's in English - no surprises there - but Square Enix was at pains to emphasise that this is more than just a localisation. For example, there are English voiceovers to increase the immersion as well, not to mention overhauled menus and UI to "better suit the taste of western players"; a particularly welcome change considering the slog that often comes with traditional JRPG user interfaces. A dash mode has also been added, allowing players to run around the world faster; more camera modes are now available; there are improved controls for the characters and the camera; and there's a new Draconian Quest mode for those who really want an extra challenge. Western fans have plenty to sink their dragon teeth into.

The first location we visited plonked us down at the start of the game, in Cobblestone, and as with many an RPG this was surrounded by pleasant faces, warm welcomes, and luscious green fields. This served as a light tutorial for the game, letting us explore the village before setting off on our quest, where our family and friends saw us off with kinds words. Then we were thrown into the open-world between Cobblestone and Heliopolis, getting a taste of combat in the game. We say open-world but what we've seen mainly consists of semi-open worlds connected to one another.

We were low level so it wasn't particularly advanced, but once we initiated a turn-based battle we could set our tactics (obviously we set ourselves as aggressive) and then chose which attacks to make. There are various abilities and attacks to use which shouldn't come as a surprise to RPG fans and the overall presentation was slick and refined, with the monster designs and environments detailed and popping with colour. With Ni no Kuni II: Revenant Kingdom releasing this year as well, DQXI should definitely rival Level-5's masterpiece in the visual department, and it does the business in terms of serving up a current-gen adaptation of Dragon Quest's iconic style.

Of course the more you battle, the more you can level up your character, and gain gold for the monsters you slay too, so as much as it might be tempting to run away from all the beasties in your path, you'll need to grind to make sure that you're ahead of the game when the big bad challenges come along (especially on Draconian Quest, we imagine). Once we got to Heliopolis there was more of the exploration and interaction side of things and we could talk with all the residents and gather information about the world, although that's all we'll say as events took a sinister turn from there before the end of the demo.

Next up we visited Gallopolis and plunged into a scenario where we had a party of four; the short and feisty Veronica; healing character Serena; the quick and nimble Erik; and ourselves, the hero. An eccentric jester called Sylvando also joined us at the end of this demo, so we can imagine we can swap out our party to suit our tastes as well.

As we wandered the desert around the city itself we encountered more battles, and got a deeper look at combat, tweaking the tactics of each member of the party to make sure that the battles played out exactly how we wanted (but, again, we chose to set everyone to all-out attack). The marvelous thing here though is that once the battles are set you can even make everything automated so that the battle plays out in front of your eyes and your party makes all the choices for you. When one gets hurt your allies heal them and all of these characters execute attacks and abilities on their own, so it's great if you just want to sit back and take in the show.

Once we finished faffing about in the sand we got to Gallopolis and engaged in a quest whereby we had to help the Sultan's son in order for him to request the Rainbough - the thing we needed - from his father. The trouble is he's pretty useless so we needed to pretend to be him and compete in the Sand National horse race (no, really, that's what they called it) to make sure his honour was maintained. We won't spoil events too much, but shortly after that a giant monster attacked the land, and we were thrown into a boss fight before we got the chance to reap our reward.

The questline was an intriguing one, we must say, and there was humour intertwined with the action throughout. It's not all serious epic adventures in Dragon Quest XI and the jolly personalities you meet along the way are a big draw for us; it's not about the destination, after all, but the journey. That said, we felt a lot of the characters weren't particularly emotive with their faces despite the impressive voice acting; a lot of them had droopy, half-asleep eyes - like the Sultan's son - even during terrifying scenarios. That said, for the most part, the characters are stunning to behold and you can see that Akira Toriyama has done a great job with some characters reminding us strongly of manga like Dragon Ball (which Toriyama also had a hand in).

Also in Gallopolis we got a chance to see some of the side activities, including the horse racing we mentioned, which while simple does offer a nice little aside if you're tired of saving the world. "It is a very simple system, but because of that the judgments required are very tight so players will undoubtedly forget themselves and spend hours racing here," Hokuto said. There's also armour crafting, inns, and shops in the city too, so whether it's a leisurely break or helpful upgrades you're after, there's a lot to keep you entertained past the main storyline.

Hokuto promises that there are between 60 and 80 hours of content in Dragon Quest XI, but with these mini-games and side-quests, your RPG experience could be lengthened to well over 100 hours. That can only be good news for fans of the series, especially since effort has been taken to pack everything with personality, from the voice acting down to the original visual style.

Of course our glimpse into Erdrea was very small, but we enjoyed our stroll through the two locations presented to us. It doesn't reinvent the wheel - you're still a hero looking to save the world with a ragtag group of adventurers - but it doesn't need to either. Dragon Quest is a tried and tested series that has been around for three decades for a reason, and with the great response the game got in Japan as well, we're particularly intrigued to see how it fares in the West come September 4, especially considering the long wait since VIII. 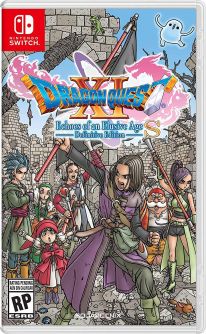