Dragon Quest VII: Fragments of the Forgotten Past first arrived on the original PlayStation in 2000 but the seventh chapter of the JRPG series, developed by Arte Piazza and designed by Akira Toriyama (the creator of Dragon Ball), has never reached European shores until now. Fortunately, Nintendo are now leading an 'remake-operation' to ensure the franchise receives the same attention here as it has enjoyed in Japan for decades.

Dragon Quest VII: Fragments of the Forgotten Past is a completely new version for the Nintendo 3DS and we recently had a chance to take a look at the final build of the game. If you're a big fan of the series, Dragon Quest VII: Fragments of a Forgotten Past will be a nice surprise, as it is much more than just a simple remake, although perhaps some might not appreciate the changes being made.

As we already stated, Nintendo is leading a major operation to make the DQ series known to Western audiences, and particularly in Europe where we had to wait a long time for the first entries in the series to get a release. The company hasn't limited this operation only to exporting this popular franchise, but they have also implemented important and substantial changes compared to the original game.

First, Nintendo has simplified the experience compared to 2000's version in order to modernise the game, also making Dragon Quest VII: Fragments of the Forgotten Past more accessible to multiple audiences, something that the Kyoto-based company is famous for. Of course, we are not saying that Dragon Quest VII is an easy game or perfectly suited to more casual players as it has the deep foundation of a traditional turn-based JRPG, but there are some interesting improvements that have made the game in step with the modern times and more in line with the needs of the contemporary audience. Especially when you consider that the original game is sixteen years old, an eternity when it comes to game industry.

The first major difference if you compare this to the original version, lies in the graphical and visual sides. Compared to 2000's game, this version does away with the isometric point-of-view with sprites and is characterised by vastly improved 3D graphics, enriched with highly detailed animations. It is especially noticeable during battles where the player has the opportunity to see the various members of the party engaged in action. Another significant change is that the game takes full advantage of the "touch" features of the handheld, something that allows the player to interact directly with the party.

As mentioned much of the changes are done to make the game more appealing to today's gamers. This means that the game has been completely revamped in terms of its pacing. In fact, in the original game the first battle came almost five hours after you started playing, but here it's a mere (!) two hours after you start the game. Making it a faster experience doesn't mean that Nintendo have removed content found in the original game, however. The game preserves all the meaty original content and the team prefers to focus the player's attention mainly on the progress of the plot, character progression and much more structured fights than the grinding seen in the original.

What makes the experience even easier is the introduction of a special amulet that the player receives a few hours after they starts to play that will make the search for fragments of forgotten past much easier, lighting up when a fragment is near. At the moment, we don't know whether this solution will please the most hardcore JRPG players as this addition speeds up the experience and makes it much more streamlined, but on the other hand it takes a bit of the thrill of exploration and research away. We are waiting to play many more hours in order to give our verdict on this change.

Another interesting change is the addition of challenges using fragments, which unlock special dungeons that feature remixed bosses you have previously met. The player, in fact, receives fragments in order to clean the dungeons, and based on their performance it changes the difficulty of the dungeon and then you can challenge other players via Street Pass. This addition will allow more daring players to test their skills against other enthusiasts, adding some extra challenge to compensate what was removed from the experience as a result of its modernisation.

Finally, one of the other modified aspect compared to the original is the increase of the "evocations" (those which are commonly known as classes) to 50. Most of these are monster-classes and allows you to turn a member of your party into a creature you already faced. Another interesting thing is that for each monster-character, each class has a different look, and that means that the characters have different clothes and accessories, etc. Furthermore, thanks to the Street Pass feature, you can send your creatures to find fragments, another aspect that changes the experience. Last but not least, an essential element you find in all recent DQ, the Monster Farm, makes its return. This is a ranch where you can breed monsters or where you turn a member of your party into a monster.

Dragon Quest VII: Fragments of the Forgotten Past is hoping to appeal to both longtime JRPG fans and players who may be new to the genre and franchise. It's an interesting challenge, and it remains to be seen how well it is pulled off. What we do know is that there's a classic JRPG in there, and hopefully the extra work will only help bring that out.

REVIEW. Written by Alfredo Germont on the 19th of September 2016 at 12

"They have been able to find a balanced formula that rejuvenates the title just enough without destroying the aspects that made it a classic in the first place."

Dragon Quest's Miyake explains lack of popularity in the West

"To be completely blunt, it's like Nintendo took half of the bill."

PREVIEW. Written by Fabrizia Malgieri on the 6th of September 2016 at 17

We took a final look at Arte Piazza's remade classic.

It took three years, but it's finally happening. 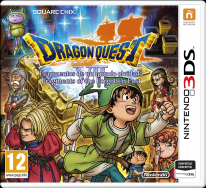