As Zelda tie-in Hyrule Warriors proved, taking the Dynasty Warriors gameplay and overlaying it with iconic game franchises was a smart move.

People put off by the inaccessible Three Kingdoms story clicked with tales told about a series more familiar to them. Another reason: heavy fan service. Omega Force's spin-attack on Zelda played out like a "best of", lifting as it did characters and enemies from the entire stretch of the franchise's history. And while it was a game that favoured sword play over puzzle-solving, and enemy counts that massed in the double-figures rather than singular encounters at any one time, Hyrule Warriors sang with an authenticity usually reserved for first-party efforts.

So it'd make sense for Omega Force to try again somewhere else. And indeed it has, and succeeded.

Dragon Quest Heroes is already a critical and commercial hit in Japan, where it's become one of the best-selling PS4 games since release back in February this year. The UK finally gets to join the slugfest (or should that be slime-fest?) next month, and we got hands-on with near-finished localised code.

It's an adaptation of Square's other beloved RPG franchise, and offers a similar package of greatest hits, tossing in classic heroes and enemies alongside newer faces. And it surprisingly doesn't attempt the easy repeat of offering only pure hack 'n slash action. Familiar RPG elements are interwoven to make this take a proper representation of Dragon Quest. You'll be able to upgrade your characters, earn new weapons and armour, build a party and switch between them on the fly, explore a world map and capture enemies then make them fight for you.

There's still plenty of exposition via inter-party chatter between missions. Dialogue's strong here, the extra months between its local release dedicated to getting a robust voice cast that clearly are having fun with the setting, not to mention the script.

But once you're dropped into the world, conversation's mainly between blade and flesh. You rush through levels daubed in authentic DQ visual fashion, battling foes as directed by on-screen pointers. There's a nice degree of different attack types and combos to lean into whether you're pushing back groups of tackling more powerful individuals. Annoying realisation though? Camera lock-ons are only available on the latter, making for the odd missed opportunity as, say, a spiralling whirlwind strike hits the edge of the crowd rather than burying itself in the middle.

Monster-collecting adds additional tactical edge to the fighting. Using your smarts in a Dynasty Warriors title usually means knowing when and where to plug a gap on the chaotic battlefields: continually shifting danger zones such as allies who are about to be overrun, areas that must be defended or bosses stopped in their tracks. The strategy is less about altering your interaction - chained attacks and powerful sorcery are still the path to clearing out enemy armies and winning - and more being in the right place at the right time.

Capturing creatures by defeating them gives you a gradually growing number of support troops to drop into the field. You're limited to a small number of slots in your inventory, and bigger monsters take more space. Along with each monster having a health bar, this means you can't just spam the battle with helpers and sit back.

In the introductory sequence to this new ability, we have to defend a generator, with two entrances to its location. While the arena it's based in isn't huge in itself, the number of enemies is, and they spill in from either end simultaneously. As always, it's about crowd control. But while you're thrusting yourself into the frontline to push back attackers on one side, you can drop newly-anointed friendlies to keep the other in check until you've time to clear it out properly. How deep this tactic will be, and what variation will be on offer is unknown yet.

As with Hyrule Warriors, we had some fun with Dragon Quest Heroes. Whether that enjoyment stretches and builds over the course of the whole game is obviously a big concern. Button-bashing fatigue is more an issue with Omega Force's works than most, variation mainly coming from story and upgrades than combat. It's something about the endless waves of enemies that seems to quicken our approach to gameplay burn out in this game type: the franchise tie-in aspect helps slow that down.

Bizarre omission though, more so given the two character selection at game's start? The lack of co-op. Embedding a two-player mode into a pre-existing multi-character party system was likely a headache, but it feels like Omega Force has missed a trick here. Though there's news of a sequel coming - perhaps we could get a full party multiplayer going for the next game...

Dragon Quest Heroes: The World Tree's Woe and the Blight Below (yes, the honest to god subtitle for the Western release) is out on PS4 this October, and we'll have a review closer to the release window.

Revealed by an advert on Steam.

PREVIEW. Written by Gillen McAllister on the 19th of August 2015 at 13

PlayStation exclusive and coming this year.

The game's creator teases some special projects for the big anniversary next year.

One of them is Jessica, who appears as a personal request from Koei Tecmo's general producer. 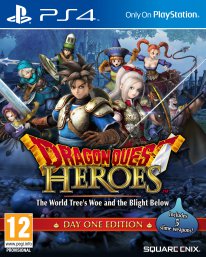