"Few games have offered a world as diverse, charming, and unique as the one present in Dragon Quest Builders 2."

Dragon Quest Builders 2 will land on Xbox One next week!

It will be available as part of Xbox Game Pass.

The RPG game will include all bonus DLC previously available with the PS4 Season Pass, bolstering the content offering.

Kazuya Niinou is moving on from the company, and says he "wanted to try out a development cycle different from Square Enix".

The Square Enix and Omega Force-developed adventure builder Dragon Quest Builders 2 has sold 1.1 million copies in less than a month.

This includes new recipes, areas, items, and more, although free content has also landed in the game as well.

We get creative in Dragon Quest Builders 2 on today's stream

Square Enix's colourful sandbox returns, and we're here to see what we can make in the expansive RPG.

Discover the joys of agriculture as well as new tools.

They show aquatic gameplay, male and female heroes, and gliding.

The sequel will let you play in the first-person.

We'll get to build, swim, and paraglide with friends. 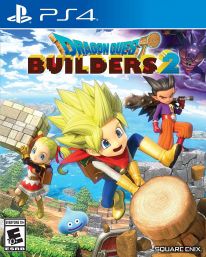