We're not 100% sure, but we dare say Dragon Ball is one of if not the biggest license adapted into our medium. There are a ton of video games out there inspired by this massive Japanese anime, this due to a level of popularity that has gripped several generations of fans. In recent years, those fans have had Dragon Ball Xenoverse 1 and 2 as good examples of games drawn from the universe, but Dragon Ball FighterZ is something different. Here the priorities are the combat system, gameplay, and graphics. As soon as the game was revealed at E3 17, it seemed to have the potential to be something special, and the multiple beta tests that took place over the last couple of months helped reinforce that notion. However, now that we have played the final version we can confirm that FighterZ has spectacular graphics and fun gameplay, but in terms of content, it's somewhat lacking.

The game manages to deliver the acceptable minimum, presenting a story mode, online gameplay, and an arcade mode, all integrated into an online hub (which also works offline). It's enough to keep players busy, but if you're coming from Dragon Ball Xenoverse 2, you will miss the vast amount of content included in that game, including the character roster. The most important names are here - Goku, Vegeta, Piccolo, Cell, Gohan - and there are also some more recent fighters like Beerus, Hit, and Goku Black. There is even a completely original fighter in the form of Android 21.

It's a reasonable list, but it's far from the most complete we've seen in a saga game. Many of the secondary characters are absent, and the various forms of some of the fighters have also been left out. You cannot play with 'normal' Goku, or with the several Cell and Frieza forms. There are some transformations in the game, like Goku SSJ3, but they happen as part of a special move and disappear as soon as the action ends. This limited character roster, and the inability to transform characters during combat, will definitely disappoint some players.

Then we have the story mode, which was our biggest disappointment with the game. It's a completely original narrative, so kudos on that, which focuses on how mysterious waves of energy stole the power from almost every fighter on the planet. Only those who have within them an "unknown soul" (the player) can have their power back. The story is told through sequences between fights using in-game graphics, but the script is weak and childish, although not unlike the formula we've seen from the saga in the past. What is strange is the fact that the animations in these sequences are lacking fluidity, almost as if it's missing frames. The narrative also includes the appearance of evil clones all over the world, clones inspired by the various characters in the game. These are clones that end up serving as your main enemies in the story mode, meaning you repeatedly fight the same opponents over and over again.

The story mode is divided into three arcs which tell the same story but from different perspectives. When you finish the first arc, you will still have many questions, questions which will be answered in the following arcs.

Each chapter includes a map that works as a board where several pieces are positioned. One is the main fight to advance the story, but there are also secondary encounters where you can win items and battles that allow you to unlock additional characters. The number of steps the player can take on this board is limited, but we always had enough steps to accomplish most of the goals without problems. Sometimes extra battles come up after you've started roaming the map, and these give you advantages if you win them, but they're too easy. Unless we missed something, there is no way to change the difficulty in the story mode, and as it stands we managed to win the overwhelming majority of the fights without losing health. There are some that serve as tutorials, but even those that aren't tutorials, and battles against characters many levels above ours, were ridiculously easy.

This removes any tension from the story mode since it didn't really require any effort on our part. Maybe something is missing, an obscure option we didn't find, or maybe Arc System Works is preparing changes in the day one patch (which we didn't have access to), but what we've played was too easy. On top of that, the story was uninteresting, and the fights were very repetitive. In other words, it should be easy to understand why we were so disappointed with Dragon Ball FighterZ's story mode.

We ended up enjoying Arcade mode the most. Here the difficulty was better balanced and it got more challenging as we progressed. There are three variants of the Arcade mode - with three, five, and seven matches - and each has a hard mode for anyone looking for a bigger challenge.

The biggest challenge, however, will be online against other players. The version we played had the online mode turned off, but from our experience of playing the beta (where we seemed to avoid the issues that impacted others), it seems to be working fine. In any case, stay tuned because we will report any issues that arise if required. In addition to the battles, you can interact with other players through the central area. Here you can choose a character to represent you, and there are a number of personalisation items that can be unlocked. New characters, colours, titles, stamps... they can all be unlocked with the purchase of capsules. Imagine Loot Boxes in the form of capsules which can be bought with coins you earn by playing. It seems it will also be possible to buy capsules with real money, but since the online features were turned off, we can't really confirm that. Be that as it may, the content you get from capsules is purely cosmetic.

The best element in Dragon Ball FighterZ is the graphics. It's spectacular how the 3D models in the game can recreate the animated look of the series so well. It resembles an episode of the greatest quality, with highly detailed characters and excellent visual effects. The sound effects are also what you'd expect from a Dragon Ball game, and fans will surely enjoy the option to play with English or Japanese voices. And then we have the gameplay.

Dragon Ball FighterZ works as a 2D fighting game and employs an extremely fluid and fast gameplay style. It's all very spectacular, with relatively accessible gameplay. The combinations are easy to execute, and the game strikes a good balance between staying true to the series and translating everything into a more traditional fighting game format.

The combat system is based on three on three battles, although only one fighter is active on each side. You can switch between fighters at any time, and you can also call for an assist. This is important, and to be successful in the most challenging battles, you will have to learn how to use assists to maximise their effectiveness and know when to alternate characters. When a character is out, they can regenerate some of their health, which also offers a certain tactical element to the game. The biggest problem with this system is how confusing it can be when translated onto the screen. With such fast gameplay and with effects that fill large portions of the screen, it's sometimes hard to grasp what's going on.

The characters have their differences, but in terms of control, they are mostly the same. It's something common in games inspired by anime, but it also removes some of the depth and variety from their gameplay. Still, the most important thing to keep in mind is that Dragon Ball FighterZ's combat is accessible and fun, with room for players to show their skill.

Dragon Ball FighterZ is a true fighting game, closer in terms of gameplay to something like Injustice 2 and Street Fighter V than Dragon Ball Xenoverse or Dragon Ball Battle of Z. In terms of graphics and gameplay, Dragon Ball Fighter Z is the best game in the saga that we've played, but we think that in terms of content there is still a lot to improve. Last year we had great fighting games like Injustice 2, Tekken 7, and Marvel vs. Capcom: Infinite. Comparing this with those, Fighter Z sits closer to Marvel vs. Capcom: Infinite, which in our opinion was the worst of the three. However, if you're a Dragon Ball fan, it's an easy recommendation, as long as you don't mind swapping content for gameplay and graphics.

HQ
Gamereactor UK
+
Superb graphics. Accessible and fun combat system. Original story. Most of the important characters are here.
-
Story mode drags and it's very repetitive. It's miles away from Xenoverse 2 in terms of content.
is our network score. What's yours? The network score is the average of every country's score 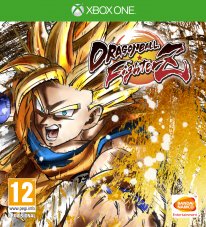