Many of us have been waiting for Dragon Age: Origins anxiously. When Bioware first announced their plans for Dragon Age, the spiritual successor to Baldur's Gate I almost fainted. I have spent reading every piece of information I could find and watching every trailer released. The wait is finally over!

Bioware have created a brand new world for their latest offering, Ferelden. It's a world with its own unique history and it comes with built in conflicts, and it's a world that comes across as much harsher and more brutal than most fantasy worlds. It's a dirty world, reminiscent of medieval times, and I can guarantee that you have never visited a fantasy world this well made. It's a merciless, bloody and barbaric world, and it fully deserves it's 18+ PEGI age rating. Immerse yourself and be prepared to be faced with prejudice and racism wherever you turn. If you choose the path of a mage, you are going to have to live with being unwanted, mistrusted or just plain hated for your magical abilities.

You pick one of six Origins stories in Dragon Age: Origins, each with its own distinct experience. The characters you meet will treat you very differently depending on who you are, a friend in one story could be your enemy in the next one. Common to all the Origins stories is that in the you are recruited into the Grey Wardens, an organisation dedicated to ridding the land of darkspawn, by their leader Duncan. Their mission is to keep Ferelden safe from The Blight.

Darkspawn, monsters who make up the better part of The Blight have pulled together a sizeable horde, while Duncan and the king has gotten together an army in order to drive them back. It is here that you find yourself in the middle of an epic battle, and I must honestly admit that this part of the game gave me goosebumps.

Bioware have become masters of ambivalence. The story in Dragon Age: Origins is nicely balanced in a moral grey area, where there are no good or evil choices. No matter what you choose someone will suffer, and you will often be forced to take actions that you normally wouldn't agree with. You can either save one person or a whole village - whatever you choose some of your group will end up hating you for it.

As one expects from a Bioware title the cast of characters you can have join your group is fascinating. And you can easily spend hours in camp talking to them and finding out more about their back stories.

The combat in Dragon Age: Origins leaves me with mixed emotions. Bioware have simplified the classic Baldur's Gate system, mixed in elements from Mass Effect and Neverwinter Nights. The result is an undeniably good and very accessible combat for beginners, but that lacks a certain amount of depth that seasoned veterans would have liked.

There are, however, mitigating circumstances, and Bioware has not forgotten their most loyal fans, and this is why they have included the option of zooming all the way out so you can see the action from above. It's not an isometric view, but its good enough for me. And once you have gone there, it's simple to start thinking tactically. How about storming in with your mage first, to paralyse enemies with magic, and then sending in thieves (rogue) to finish them off by stabbing them from behind? Or how about jumping into a room, hiding just inside the doorway and have a Cone of Frost to welcome anyone who peaks in? In the end it worked out best for me to use both perspectives, to gain the best possible overview. I gave orders and planned my strategy from the top view, and I moved down to see the action play out up close.

Visually Dragon Age: Origins is also a mixed bag. It is far from the most beautiful game I have seen, especially when you take a closer look at the details, but with that said the environments, most animations and just the graphics in general are close to perfection. One of the weakest points is actually that the animations appear a bit stiff during the dialogues. And the lip synchronisation is poor at times. I'm not one to make a big deal out of little things like this as the general impression of the graphics and the game are that it's extremely polished. There is a lesson here for other developers who should take a look at the level of polish Bioware achieves when launching a new game.

On top of this the music is delightful. Great symphonies create the kind of epic atmosphere appropriate for this kind of game, and whenever a major battle takes place the music delivers an intense feeling.

Dragon Age: Origins is a game you should play regardless of whether you normally enjoy role-playing games. It is among the top games to come out of Bioware, and that says a lot considering it's a studio that has yet to produce a poor game. The dark and adult story will suck you in and keep you hooked all the way to the end, and combined with fierce fighting, a memorable character gallery this is something you can't afford to miss out on.

Gamereactor UK
+
An amazing and captivating story. Polished gameplay. Deatiled and realistic fantasy world. A lot of options in combat.At
-
At times stiff animations. A certain amount repetition when it comes to environments.
is our network score. What's yours? The network score is the average of every country's score

Thank you for your time. We will take care of this matter as soon as posible
A great game! 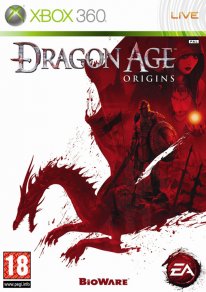