As a big fan of Dragon Age: Origins, I'm confused by some of the decisions that Bioware has made in the sequel. While the first game, and it's expansion Dragon Age: Awakening, were reminiscent of old classic RPGs like Neverwinter Nights and (to some extent) Baldur's Gate, this time around the developers have been flirting more with modern games as their own Mass Effect 2. And while I really enjoy Dragon Age II, I'm not sure that the new design is making the game - or the fans - many favors.

A big thing this time around is that the main character is always a human, male or female, named Hawke. This allows the protagonist to get an actual voice, where he or she was always mute in the original. I actually like Hawke, she (which I chose to go for, which means that is how I will refer to the character in the rest of the review) is a cool character, but I can see more traditional Dragon Age-fans being upset about being roped into a certain race where you had plenty of origin-stories to choose from in the first game. It might be easier to tell a tighter story, but Dragon Age: Origins never suffered from that problem.

Other roleplaying elements have been taken out at the same time, including stuff like customizing the armor of the followers Hawke rallies to her cause. Now it's more like in Mass Effect 2, with a certain armor type and upgrades available in shops. Just like you couldn't dress up your Krogan team member in pink armor in Mass Effect 2, you can no longer deck out your companions in whatever armor you think would fit them. In the same way you can't change around weapons as you see fit - while I wanted my Elven warrior to carry around a shield and sword, he was locked into two-handed swords despite me putting skillpoints into another skill tree. Minor detail to some, annoying limitation to many RPG-fans.

In many ways, Dragon Age II is similar to Origins. It has a similar art direction (with certain changes made to non-human characters, especially the elves and the Qunari) and it's still a dark fantasy filled with blood, sex and tons of violence. Yet it plays different, and the way the story is told will probably divide players between love and hate.

Looking at the timeframe that Bioware had in making this game it starts to make sense that they've limited themselves in many ways. You will spend a lot of time in and around the city of Kirkwall, revisiting the same areas over and over again. In fact, the environments are probably the biggest indicator that the game was rushed out the door. Dragon Age II reuses the same houses, caves and dungeons over and over - some would say almost shamelessly so, with the only thing really changing is the enemies you encounter and from which direction you enter. It's not a case of "oh, I believe I was in a similar cave five hours ago", we're talking "wasn't I here just 30 minutes ago?". It won't take long before you know the layout of most places you'll encounter on your adventures, and the only reason to explore is to find out where the chests and lootable bodies have been placed.

But wait, you might say - "I cheated and checked the grade you've awarded Dragon Age II, and so far it really doesn't sound like a 8/10 game". And you'd be right. But despite the obvious and quite glaring faults of the game, I'm actually enjoying it. So let's move on to what's actually good about it.

I'm a sucker for a good story, it's true. I really enjoy where Bioware is taking the Dragon Age-storyline. There's a lot of unanswered questions, a lot of mystery surrounding the events in both the first and the second game. While you might be annoyed by being so locked up in Kirkwall as you are, I like how different the storytelling is from the first game. This is primarily a story about political intrigue and strife, the tensions that are created when the Blight invades Ferelden (which the first game deals with) and refugees flock to Kirkwall to get away from the evil of the Darkspawn. What do the Qunari want? How do Flemeth and Morrigan, two famous characters from Origins, play into what is happening in the city and the world? Who is the Champion of Kirkwall?

To me, gameplay in Dragon Age: Origins was never as important as the story and the characters and he same certainly goes for Dragon Age II. Frankly, it was never very good and it has hardly been improved here - in many ways combat is actually less interesting and less strategic and while I still pause the game to give orders to my followers from time to time it often comes down to simple button mashing. Especially players of games like Mass Effect 2, with its fun and engaging combat mechanics, will probably be left with a rather sour taste in their mouths when playing Dragon Age II. That's certainly a fair criticism, and should be mentioned, but for me it's not the actual game - the game is found in the characters, the dialogues, the story.

And Dragon Age II has a whole bunch of memorable characters you get to hang around with, with a special mention going to the confused Elf mage Merrill and the Dwarven rogue Varric. I love the lot of them, or hate them (as in the case with a certain guard who seems to do nothing except whine whatever I do or say), even though they are not as instantly memorable as Alistair or Morrigan. I've taken them to my heart though, and they carry the game even if the caves all give me a sense of deja vu.

It took me a couple of hours to get into Dragon Age II. The first five hours or so I was extremy sceptical, and the changes to character customization and being stuck in Kirkwall made me doubt that I'd ever like it. But slowly but surely it won me over.

It might not be the sequel we had been hoping for, though. I can only hope that Bioware doesn't rush out a Dragon Age 3, instead taking their time with the next chapter. I'd love to see a Dragon Age as often as we see a Call of Duty, but sadly I don't see that happening without the quality taking an even further nosedive. Ubisoft showed that it could be done with Assassin's Creed: Brotherhood, but that seems to be the exception to the rule. So while I'm still a Dragon Age-fan, I don't want to see a sequel until 2014.

Gamereactor UK
+
Wonderful characters, great story, well-written dialogues
-
Reused environments, still lacking graphically, gameplay hardly as good as it should have been
is our network score. What's yours? The network score is the average of every country's score

Offline
Monica75 on the 22nd of March 2011 at 11:02.
Very saddened to see the game go this way, the game itself is an ok game but from what the original Dragon Age was this is terrible. Combat has been dumbed down, on release there were over 20 DLC items available only for doing silly things such as 'likeing' the game on facebook or preordering before a set date from a set place, there we're also quest DLC's from preordering, DLC on release is crazy but that much is just insane. Not to mention that you also HAVE TO download over 1gig of data to get graphics better than the PC version. 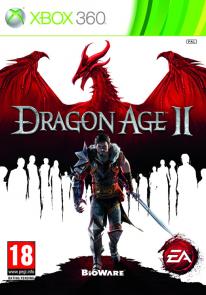