During a 2012 TED talk, the neuroscientist Daphne Bavelier explained the results of a series of research projects, tests that showed that video games - contrary to public opinion - develop certain areas of the brain not only in regular players but also in gaming novices who "train" themselves to play video games from scratch as part of a daily routine. The results showed improvements in terms of reflexes, with a sharper eye and more effective response times, and it demonstrated that playing video games allows you to develop certain areas of the brain, rather than weakening them as it had previously been suggested.

Even before Bavelier and her team delivered these results, in 2005 Nintendo launched the very first game in the series - Dr Kawashima's Brain Training: How Old Is Your Brain? - on Nintendo DS, with exercises that were designed by the neuroscientist Ryuta Kawashima to develop the prefrontal cortex of the brain. Thanks to its series of arithmetic-based exercises and mnemonic tests, this game quickly became a must-have because, combined with the versatility of the platform, it delivered exercises designed for practically any type of user. Discovering one's brain age and testing oneself every day had become the goal of many - and not only for young people but also for older users who perhaps had never spent much time with video games before. This blend of youth and experience proved to be the foundation of success, to the point that it spawned a sequel, More Brain Training by Dr. Kawashima, which was published in the same year, and a port for Wii U in 2014.

With an increasingly active focus on Giovenale's motto mens sana in corpore sana, Nintendo decided that the time was right to bring Dr. Kawashima and his exercises to their latest console, the Switch, with Brain Training by Dr. Kawashima for Nintendo Switch. And despite the fact that the basic formula has remained largely unchanged, there are still important innovations that distinguish this version from the game that was published almost 15 years ago, starting with the innovative of IR technology found inside the Joy-Cons. But let's start at the beginning: what does the package include? In addition to the software, the physical copy of the game also includes an elegant stylus with which to accurately perform the calculations and requests made by our good old doctor.

And here we need to make our first criticism: although the accessory works very well 80% of the time, we frequently encountered involuntary errors, especially in the calculation mini-game, because the touchscreen did not recognise certain numbers, despite them being written correctly. This often involves not only an error in writing the exact number, but also losing precious seconds rewriting the answer for the game to recognise it. And apparently the fault is not only ours and our horrible handwriting, as it also happened to someone we played with - which we will discuss shortly - during his individual tests.

Before starting to make calculations and train your memory, Kawashima Brain Training for Nintendo Switch invites you to take a brain age test to understand what the status of your prefrontal cortex is. Three different puzzles are provided, as usual, and based on the speed of response, errors made, and mnemonic abilities, a verdict is thus formulated. And in our case, thanks to the Christmas holidays and our total relaxation, the result was rather disappointing (spoiler: it thought we were 71 years old!).

Once the test has been performed, exactly as it was in the previous games, we have access to a series of mini-games - from maths puzzles to speed reading and playing music - all aimed at improving us. There's a total of 13 games and they are unlocked over time. Unlike the Nintendo DS game, Dr. Kawashima doesn't let you unlock the mini-games all at once, but rather it insists on a level of commitment that is rewarded in the long run, and with a routine of a few minutes per day the improvements are evident rather quickly. Some classics from the original are back, revisited for modern audiences, such as Digital Calculation, during which we use the IR function to give our answers. Chinese Morra also works the same way, which is probably one of the exercises that we have played the most in our game sessions.

Another big addition is the multiplayer mode, which allows two players equipped with a Joy-Con controller each to challenge each other in various skill-based tests. In addition to the aforementioned Digital Calculation, there are also exercises such as Bird Counters, Pipe Counters, and Flag Raisers during which motion controls and Joy-Cons buttons are used to respond. There are only a few challenges, but it is always a lot of fun to test yourself in the company of a friend, especially when there are personal scores to beat.

In general, the experience offered by Brain Training by Dr. Kawashima for Nintendo Switch confirms its already excellent premise, with the addition of new mini-games such as Sudoku, yet it still has some problems. And we're not talking about content, but about usability. In addition to the problem of detecting handwriting, another flaw of Brain Training is the fact that it cannot be fully played by anyone who owns a Nintendo Switch Lite. In fact, the game has not been optimised for this version of the console, as the Joy-Cons are integrated into the unit itself. True, it is still possible to play by connecting two external Joy-Cons, but this is a significant shortcoming, and there's the fact that the new IR functionality is not present in this version of the hardware.

This doesn't stop you from being able to play, but it is a pity that its potential is not fully unlocked for Lite users. Apart from these problems, however, Brain Training is a stimulating and captivating educational game that pushes you to play more thoughtfully. We might have expected a bit more from its move to the Nintendo Switch, maybe a few more new games, but despite this lack of evolution, it remains a good exercise for the mind and a good way to keep your brain feeling fresh. It will also be interesting to see how much added value we'll get from the presence of a mode not yet active at the time of writing, the World Brain Training Championship, which should be an additional incentive to return to play on a daily basis.

Gamereactor UK
+
It remains a classic experience, stimulating, Fun to play together, Stylus included in the package.
-
Sometimes the game doesn't recognise your handwriting, two external Joy-Cons are required to play on Switch Lite, We would have liked some more games.
is our network score. What's yours? The network score is the average of every country's score

REVIEW. Written by Fabrizia Malgieri on the 8th of January 2020 at 12

"Brain Training is a stimulating and captivating educational game that pushes you to play more thoughtfully."

You can do mental exercises once again with Kawashima, and the new video introduces you to the concept.

Brain Training is coming to Switch

The franchise is branching out onto Nintendo's current hardware, having previously lived on the DS. 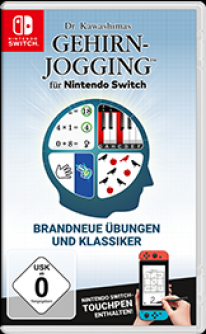