Microsoft started to bring a lot of old Rare franchises back last generation, and for Xbox One we got Killer Instinct, Rare Replay and Battletoads, and on The Game Awards this year, they announced the comeback of Perfect Dark. But the game most people have been asking for is a new Banjo-Kazooie.

As Microsoft and Rare seems to be OK with other developers than Rare bringing back the classic franchises, there has been some speculation that the veteran and overall awesome guy Tim Schafer's company Double Fine should do Banjo-Kazooie, as they are a part of Xbox Game Studios. These speculations has reached Schafer himself and he says that it is "nice that people think about us when they think about that game", but he does not seem to be interested, and suggests there's a better suited company:

"It's interesting to think about, but I feel like that wouldn't be the best use of Double Fine because I think our whole thing is making stuff up. People somehow got in their heads that we should do a Banjo-Kazooie game. Why should Double Fine make Banjo-Kazooie? You heard about this company called Rare? Because I think they're still around!"

It turns out that Schafer does love Banjo-Kazooie though, and he does not mind that people think it would be a great fit for Double Fine:

"I really like that game, and if they think of Double Fine when they think of brightly coloured platformers that are a joy to experience, then that's great they think of us. But we also like to, you know... we'll make up something new that people like just as much."

If you could not choose Rare, which developer do you think would be best suited to bring Banjo-Kazooie back?

Double Fine not interested in making a new Banjo-Kazooie

Double Fine's Tim Schafer spoke out about the speculations.

You can pre-order now in time for October. 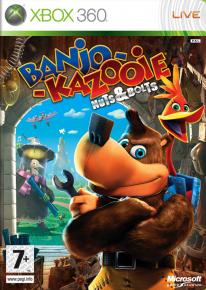