We went back and tried to watch the original Doom recently. In 2020 we're all a lot less patient when it comes to blatant misogyny when we see it on screen, and we quickly turned off the film despite it starring Dwayne Johnson and Carl Urban and being mildly watchable in places. The bar isn't very high when it comes to Doom movies, and so when we spotted Doom: Annihilation on one of our streaming services we weren't expecting much. The one-star review was another factor that took a shotgun to our expectations, but we're suckers for a good bad movie and so we watched it anyway.

And while Doom: Annihilation is pretty terrible, we're still glad we stuck with it. Sure, the special effects aren't good, the acting fluctuates between alright and poor, and the storyline isn't particularly inventive and it's all a bit too predictable, yet there's a B-movie charm to the whole production that means that we kinda liked it despite the fact that there's very little here to like.

Lieutenant Joan Dark obviously couldn't cope with the pressure of having the coolest name in history and somehow screwed up a past assignment to the extent that her entire military unit draws the short straw of an extended mission to Phobos, a moon orbiting Mars that houses a secretive base. Of course, we find out more about this enigmatic back story in due course, however, we're not going to spoil her redemptive arc for you because that's just not cricket.

Dark and her band of brothers and sisters are accompanied by one of the Lieutenant's former squeezes, a scientist who's terribly excited about going to Phobos. Can you see where this is going? Doom: Annihilation is about as subtle a rocket launcher in a room full of red barrels, but then we wouldn't have it any other way, especially as we look forward to Doom Eternal, which is on the immediate horizon and shaping up to be very good indeed despite a relative lack of subtlety.

We're not going to dwell too much on plot points because we've arrived at this party a little late (the film originally dropped at the tail-end of last year, we just missed it the first time around) and because accomplished storytelling isn't really the main point in a film like this. All we'll say is that the story involves lots of Doomy things, including portals that link dimensions together, and naturally, things go bad and it's not long before Dark's military unit is up to its collective elbows in demon-spawn and shotgun shells.

Speaking of which, the film's meagre budget means low-quality demons and not many of them. We suspect that the production team made one costume and a lot of makeup go as far as humanely possible, and the lack of budget really shows. We encounter Zombiemen-like enemies that run around like they've just escaped from the set of 28 Days Later, and later Imps that can throw fireballs. Alas, that's just about all she wrote, and apart from a couple of CGI moments, the production team wasn't able to muster anything more dangerous than a demon who wouldn't have looked out of place in a battle against the Power Rangers.

That sounds bad - and it is - but yet we still found things to enjoy despite the fact that Doom Annihilation isn't really up to scratch in any one area. The actors aren't helped by a low-quality script that fires cliches and bullets in equal measure, and we didn't recognise a single actor (and that's rarely a good thing). It certainly doesn't help that the staging feels very low budget too, and we wanted more demons to spice up the battles and elevate the action, yet they never arrived and as a result, it felt like the film never got out of second gear.

That said, we did like a number of nods to the video game series that inspired it, with the chunky colour-coded key cards our favourite touch by far. Is that enough to save this film in the eyes of the majority of the people who watch it? Absolutely not. However, if you're the kind of masochist who likes to watch movies that are so bad that they transcend traditional criticism and become good on the strength of their own terrible nature, we reckon you'll have a jolly old time suffering through this one.

Sometimes films can be so bad that they're good. This is one of those films. 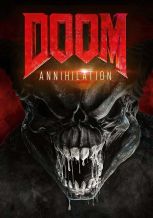