We didn't quite remember how difficult Donkey Kong Country: Tropical Freeze was, or perhaps we're a bit embarrassed to admit it took us a few hours this time to master a game we'd beaten already four years ago. What we did remember, however, is how good it was, as it's arguably one of the best side-scrolling platformers ever. With this new version for the Switch, Nintendo wants to enhance the quality of the Wii U original by adding true portability and some new accessibility features, and it seems to have helped a lot.

Since the game is known for being pretty tough, it's clear the introduction of Funky Kong as an alternate playable character is way more than a mere cosmetic, fan-servant guest appearance. It's a fully purposeful addition, meaning that what could be deemed as a hardcore platformer at times now gets the kind of mainstream appeal you'd usually expect in the genre, but it's something that has been implemented in a smart way.

Funky Kong gets his own 'campaign' so to speak, as the surfer leaves his former travel agency and retail businesses behind to take an active role in events, meaning you'll play as Funky (and only as him, with Donkey Kong absent and thus no aid from Diddy, Dixie, or Cranky) should you choose his brand-new playstyle. With a third heart/hit on his energy bar, double-jump, hovering ability, infinite rolling, and taking no damage from spikes, Funky Kong looks like an overpowered, God mode-like character on paper, but the truth is that he's so well implemented that it doesn't come across this way in practice.

In fact, he feels so good to play, that it really just makes the game more accessible or, as Nintendo puts it, allows for a chill mode so everyone can enjoy their time with it. In other words, it's of course easier, but it's not a dumbed-down version of the game, as the new character works surprisingly well with the original level design, even making for interesting new challenges for speedrunners. As such, even though it looks weird story-wise, Funky Kong is the best choice for new players and for those who want to take a first run at learning the ropes, whereas Donkey Kong fits better for genre-lovers or those who have gone through Funky training.

Retro Studio's Donkey Kong Country experience is unique in that it differs a lot from the blocky, timed, ability-based 2D Mario levels, as well as from the more relaxed pacing of its Yoshi or Kirby counterparts. This game is all about momentum, about getting your ape to use the needed strength and make to each leap, and you'll often have little room and time to gain that speed. You won't see the Game Over screen so easily because there are additional lives (balloons), but believe us when we say that you'll probably pop a fair few of those balloons in each level, even between two checkpoints.

That being said, one has to be more humble when approaching the difficult levels. We're so stubborn and self-confident we don't want to buy any aid items and we want to grab every puzzle piece and every K.O.N.G. letter as we go, but if you personally think that helpful items are part of the game, you'll have a fairer time. In this sense, it can get frustrating, the player too dependent on learning sections by heart (which again takes us back to Funky Kong being a friendlier starting point), but that happens with every major 2D platformer, and the brilliant level design will just make you want to keep playing. It's full of secrets and varied mechanics, and it rarely pulls off the same trick twice. The worlds feel physical, alive, and rewarding above all as it always offers up a reward or two for those curious to explore and to take risks.

Worlds 3, 4, and 5 (of a total of 6) are where the game peaks, with some truly memorable levels you won't find in any other game, including rhythmical platforming, state-of-the-art designs, amazingly elaborate on-rail sections, and breathtaking underwater areas. What's more is that the soundscape is top-notch as well, with punchy audio effects, dynamic tunes, and of course David Wise & co. delivering hair-raising tracks.

Besides, Retro Studios has used a smart combination of suitable artwork, geometry load, and dynamic camera movement to make this look beautiful and modern while also playing smoothly at a rock-solid 60 FPS. No matter the situation, or the varying atmosphere and effects, the frame-rate remains stable, which is a must in a platforming game this demanding. It looks even better on the Nintendo Switch, with crisp 1080p60 on TV mode and close to 720p60 resolution on handheld, meaning more than double the resolution on both modes compared to the Wii U original, and of course an enormous leap when you come from the clearly limited adaptation of 3DS title DK Country Returns. You can add to that much faster load times.

Now there are a couple of things that, in our opinion, means Tropical Freeze on the Nintendo Switch falls just short of perfection. Our first gripe doesn't relate to the system itself, but to the original game. While the challenging level design has aged surprisingly well, the same can't be said about the boss encounters. We understand they have to be as challenging as the levels before them, and it's great they're so well thought-out with different phases, but they lack the dynamic feel of the regular levels and can be just too long, sometimes almost a chore.

Then there's something we've noticed that can be an issue with other 2D platformers on the Switch. We're from the Y+B Super Mario School, which means we've been using Y to run/roll and B to jump, same thumb, for around 30 years. Now this is quite tricky with the right Joy-Con, as the analog stick is now placed just beneath, leading to pretty annoying misclicks; if you think it isn't that serious, just give it a try. The alternative control layout doesn't work for us either, as you also need to grab/throw items (ZR by default), which isn't an issue if you play with a Pro Controller either on the TV or in handheld, but you'll naturally want to play this on the go with the attached Joy-Cons. The solution is going X+A, which takes some time to get used to, and some awkward positioning for your hands. Not to mention if you also want D-pad movement instead of analog...

It's an unfortunate annoyance when the game is now more accessible in several other areas, but it doesn't take away from the fact that, with time, we've truly enjoyed the whole adventure on both modes once again, and that says a lot of a game we had mastered and beaten already. It's platforming at its finest, and it's more accessible on the Switch, making it another must-have for genre lovers.

Advertisements
Gamereactor UK
+
Funky Kong is a needed alternative, Shorter loading times, Crisper graphics on both modes, Many levels remain among the best in the genre.
-
Can get frustrating if you don't go Funky, Bosses get tiresome at times, Handheld button layout makes it awkward.
is our network score. What's yours? The network score is the average of every country's score 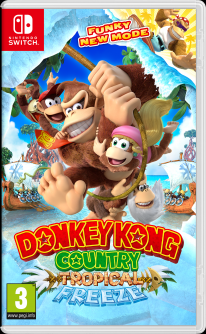