Wii U gamers were lucky enough to receive Bayonetta and Bayonetta 2 in 2014, a simultaneous release that solved the absence of this kind of action game on Nintendo's console. PlayStation 4 and Xbox One owners didn't have the same luck in this department, and that's why this remastered version of DMC Devil May Cry is very welcome. Would we have preferred a new game? Of course, but for now this Definitive Edition will do.

DMC Devil May Cry was originally released in 2013, and it was a project that divided both fans and critics alike. The game was actually a Devil May Cry reboot from Ninja Theory, and it offered a new take on protagonist Dante and his story, all the while keeping the combo-based gameplay the series was known for (mostly) intact. Critics, in general, were pleased with the game, but many fans showed their displeasure with the new direction the series had taken. For our part, we thought it was a great way to breathe new life into the series - an opinion that holds for this update.

This "Definitive" version of DMC Devil May Cry brings the full experience to current-generation consoles, and then some. New skins for the characters, enhanced graphics, more fluid gameplay, a better and more refined experience, as well as the inclusion of DLC (Vergil Downfall) are the highlights of this latest version. Overall, this Definitive Edition is a very competent remaster.

Graphically, there are clear improvements. Everything is better defined and more polished than it was in the original versions on PS3 and Xbox 360, and that includes character models and textures. There are some discrepancies in certain details that show the game's roots in the last generation, but this Definitive Edition is generally a marked improvement.

A bonus of the new version is the inclusion of Vergil Downfall, a DLC for the original game where you can play as Dante's brother. With the original campaign, the new chapter with Vergil, plus multiple game modes and difficulty levels; the Definitive Edition has enough content to entertain Devil May Cry fans for many hours.

The game includes several levels of difficulty (some unlockable after beating the previous ones) and includes a unique level for veterans, called Gods Must Die. This is the highest level of difficulty in the game and although we have not had the opportunity to experience it, it promises to test even the most competent players to the fullest of their abilities. But there are more challenges waiting for you.

To begin with, there is a new hardcore game mode, compatible with all levels of difficulty. This mode offers a redesigned experience that is closer to the classic feeling of the series, redefining the style ranking system, the timings on several actions, and the damage inflicted by enemies, amongst other things. Also, if you want to increase the pace of the action, there is a new "Turbo" option that will boost the game's speed by 20%.

There is one more test for veterans, called Must Style Mode. With this option on, players can only cause damage to enemies when they are in the S (or higher) ranking for combinations. If you think you've really mastered DMC Devil May Cry, this is your chance to prove it.

Returning are the Secret Missions (secret levels with specific objectives that you get to unlock during the campaign), extras that include artwork for the game, and the Bloody Palace mode. All of this was already part of the original version, but the Definitive Edition includes an exclusive version of Bloody Palace dedicated to Vergil, with 60 extra levels to play through.

There are many new features and functions that will allow you to customise your experience. Among these options are a number of new skins for Dante and Vergil, including classic, Neo, and Dark versions. There's even a skin inspired by the original Dante. We liked the level of quality, but one detail disappointed us; as the cutscenes are pre-rendered, it uses the default skins, which breaks some of the immersion if you are using a different option. That said, it's an understandable flaw.

DMC Devil May Cry was a bold move by Ninja Theory, even if it had its share of failures. While the classic DmCs go "over-the-top" with ease, Ninja Theory's game has moments where its attempts at being cool are almost painful. Still, it's a good action game and a refreshing insight into Dante's story, easily recommended to anyone who has missed the original, or would like to try DmC at 60 frames per second on console. The title says it all - this is the definitive version of DMC Devil May Cry.

HQ
Gamereactor UK
+
Good remastering, playng at 60 FPS is a delight, includes the DLC - Vergil's Downfall, there's several new challenges and options for veterans.
-
There are many new skins, but the cutscenes don't show many changes.
is our network score. What's yours? The network score is the average of every country's score

"The title says it all - this is the definitive version of DMC Devil May Cry." 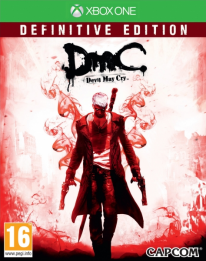