You settle on the bright colours of a cartoon show, simply because it's far better an alternative than a cooking program or another People Wish They Had Talent spin-off.

You expect little, but quickly find yourself engaged due to great production, decent story and a smattering of subversive humour. You find yourself entertained and, truth be told, slightly guilty. Guilty because you realise how cynical, and old, you've grown to dismiss today's cartoons as frivolous and bereft of enjoyment.

The same can be said for Disney Universe.

It's easy to understand why you might snort in derision at the screens and teaser trailer. A colourful assortment of characters decked out in Disney character costumes bashing their way through side-scrolling worlds based on the company's licences doesn't suggest five-star entertainment. You think all that and don't twig the last time you did so was when Traveller's Tales announced Lego Star Wars.

The comparison is just. There's the same enjoyment to be had charging round the sprawling levels, discovering secrets, solving puzzles and playfully cracking a friend around the back of the head when they're preoccupied. It's a family-friendly game that feels conceived by gamers, for gamers, rather than business suits channelling preconceived market-tested family values. Everyone knows strengthening ties to your nearest and dearest in gaming involves stealing their tokens and chucking them off platform edges in-between cooperative play.

The four-player blue man (or person, to be P.C about it) group can zip up into over forty different costumes based on Disney Pixar's extensive character roster. Though what's interesting is that this debut has focused on characters that are from the studio's output this side of the millennium. There's not a mouse's ears or goofy snout in sight.

What we have is representations from Pixar's Monster Inc (a green-garbed Mike suit), Disney's classic animation division (the blue fur and black eyes of Stitch) and two shots from the company's live-action wing, Tron and Alice (the latter from Tim Burton's re-imagining).

Pixar's inclusion isn't; the live-action movies are. That a swaggering Captain Jack isn't in the line-up might be more a decision not to draw attention from Lego Pirates recent release rather than any conflict with the connotations from the character's more excessive tendencies. We theorise that swashbuckling will be part of the game in some form, and instead ask about the possibility of Marvel Comics characters (Disney bought the company last year) appearing. We're answered with a blank stare and question is brushed off. We'll file that as "watch this space", and settle in to our two-level four-player multiplayer hands-on session.

The characters may scream Little Big Planet, but the gameplay and level design forges a decent mix of the aforementioned Lego titles, as well as Behemoth's Castle Crashers, though less in difficulty and more in companionable back-stabbing.

It's for all intents a side-scroller, wider areas with multiple traversable ledges intermixed with tighter bridges, with combat and multi-stage puzzles devised around the theme of the level. Wonderland for instance has you retrieving time-altering watches to rebuild bridges while battling waves of foes, while you've to time platform leaps in Monsters Inc. factory to coincide with gaps in the organisation's door-delivery system (that sentence may make no sense if you haven't watched the film), which in turn land you right in the middle of a brawl.

Enemy AI will scale according to your actions . Fight well and some will build barriers to block your path, others will grab puzzle pieces and make off with them. While combat is grounded in the button-bashing school of thought, but there's a few additional attacks for those that want a touch more strategy and flamboyant execution to their moves. You can grab enemies and either spin with them for a roundhouse attack, or toss them off the long drops that surround most platforms, or slam them against the nearest wall. Each costume comes with its own unique set of weapons (guitars, axes and such), that each have three upgrades.

There's also the odd vehicle in each world that can be ridden (though we're not sure if 'vehicle' accurately describes a nut-kicking mule that looks like the bastard child of a Pinata and Blu-tack). But those, and the upgrades, are in short supply - usually one per level- and need to be fought over.

Interfighting happens a lot in Disney Universe. The game's been built to generate the clash of politeness and selfishness that usually comes with the last chicken wing/crisp/beer in social occasions. Except in this case, its a power-up/chest-opening key/ridable mule/gold unlocking mini-game. And players swing far quicker to selfishness when it's their digital avatar smacking friends in the face.

The mini-games are dotted throughout each level and are indicated by out-of-place arcade cabinets. You'll be given a brief rundown of the game (such as dodge bombs for a set time, kill as many enemies as possible) and a choice to play or not - do so, and the games play out then and there, with a scoreboard and declaration of a winner come their close. It breaks up the flow of the game without disrupting it.

The camera scales out according to how spread out your characters are rather than splitting the screen, though we noticed parts of the screen became obscured in certain sections of the Monsters Inc level, though we're assured this is an incredibly early build. One thing to note is that the game is built with only offline co-op in mind, as interplay between characters (and players) is a big part of the experience.

Coming off our second run-through of the levels brings with it a greater appreciation of what Disney is attempting here. Like Toy Story 3's uneven split between short story mode and the larger sandbox game that was its heart, this is a game that has no grander scheme that to offer a light-hearted, fun, experience.

In all, something that'll pleasantly surprise you, if given it the time.

A whole bunch of them.

Can't wait to be king? 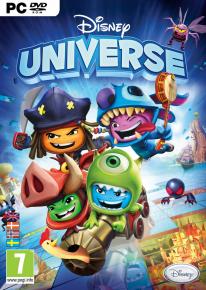