Dishonored tells the story of Corvo Atano, royal protector to the Empress, who finds himself blamed for her untimely death. While the conspirators would gladly have their scapegoat executed, there are some earthly - and unearthly - powers with different plans. The former bodyguard disappears behind an assassin's mask, because as the tagline tells us, revenge solves everything.

There aren't many games with such a promising heritage. Although Arkane Studios may be, for the time being, an obscure name for many gamers, the studio houses two developers of the original Deus Ex, and has hired the services of the Bulgarian artist Viktor Antonov, who left his definite mark on Half-Life 2.

Antonov's mark is also strong in Dishonored, as its strange, alternate version of a rundown 17th century London is enhanced by huge metal walls and sentry posts, which will no doubt remind some gamers of City 17.

At first glance, it may seem like Arkane has jumped on the steampunk bandwagon, but this is a crass simplification. The ugliest parts of old Britain have been cherry picked for the game, in architecture and faces alike, but the society they have been planted in runs on whale oil, not steam. The nautical themes are ever present, and the end result is as original as it is visceral, the streets teeming with rats, the poor, and the plague-ridden.

This inspired visual design is combined with graphics that may remind one of a sun-bleached oil painting. Houses in the distance turn into faint pastel squares, and it is obvious that hi-res textures have not been a priority for the developer. The opening scenes especially may feel somewhat underwhelming for some, but things soon perk up a bit as the design really kicks in. The game of course looks best on the PC, but even there, things have been kept fairly simple. Still, the end result is very atmospheric and effective, and most of the characters look hideous in the best possible way.

The music is a good match for the visuals, ranging from the melancholy to the dynamic, and the voice acting features such talents as Susan Sarandon, Brad Dourif, Carrie Fisher and "Hit-Girl" Chloë Grace Moretz. While there is nothing to complain about a selection like this, the lines do feel a little rushed at times, as if the mixer had done a "Walken" on them by stringing them too closely together. The guards also possess precious few lines which are quickly recycled.

Dishonored opens what could be called the autumn of the assassins, as it'll be followed closely by the new Hitman and Assassin's Creed games. However I believe it'll survive the unavoidable comparisons with its competitors well though, as while it is a game of stealth, if can become an action adventure at the drop of a hat.

While the maps are a ninja's wet dream, there is always that one guard that you forget about who surprises you, but that is alright in a game that combines stealth and action in such a wonderful way.

Corvo is a capable fighter with sword and pistol alike, but this is no slighted Italian nobleman we are talking about here. The 'blessing' of the mysterious Outsider lets the ex-bodyguard access a variety of occult abilities that turn him from your average assassin into a downright superhero. Teleporting from one place to the other, summoning lethal swarms of rats, and actually bending time itself, Corvo is in a league of his own. He also has his own special sight to see through walls, Arkham-style.

Though there is only a handful of these skills, they allow for a variety of different approaches. Corvo can be fashioned into a near-invisible infiltrator, a three rings circus of death, or something in between.

This freedom of choice is at the core of the Dishonored experience. The scenario-areas are large and full of variety, and this is where the game really shines. Corvo can complete his missions in numerous ways, and there is always a multitude of routes to exploit. Uniquely enough, this is a game of assassination which can be completed without killing anyone, including the targets. Also, the non-lethal options tend to be quite a bit more satisfying than just shooting the target in the face, which admittedly has some merit to itself. In any case, the inherent replayability is through the roof here.

Actions do have their consequences, and the world grows darker along with Corvo, its streets growing riddled with the plague-ridden and the rats who have brought the disease with them. Also, the NPCs will begin to respond differently to the killer, and the ending may turn out rather dark indeed.

For me, it was the orphaned daughter of the Empress who kept me from taking the easy, bloody road through the story. Even though she plays a limited part, Emily is basically the one good thing in a world that is otherwise full of corruption. She adds that one ray of light that makes all the shadows look all the darker.

It is things like this that make Dishonored's plot so involving. There are plenty of side quests woven into the story, but once again, it is up to the player if they want to explore those avenues. In this game though, these optional quests are worth it. There is also a treasure-hunting mechanic, but for a change, everything that you pick up is actually useful, either opening up new abilities, perks or just earning Corvo some good old cash for new weapons upgrades. There are also numerous books and notes that the player can read, to really immerse himself in this rather twisted alternate Britain.

The options menu deserves a special mention, as it allows the player to tweak numerous graphic settings and game elements, to better match his own likings. All too many developers forget this sort of thing these days, so I lift my hat to Arkane for doing one better.

Dishonored is a splendid new addition to the stealth-genre. It offers hours of lurking in the shadows, but players are always free to just dig into the action if he so chooses. The best achievements will naturally be awarded to the most devoted of ninjas who can complete the game without even being spotted once. Whatever your approach, this is an excellent game that I would recommend especially to the fans of the old Deus Ex and the Thief-series.

Gamereactor UK
+
Freedom of choice, varied maps, visual design, many tweakable options
-
Mild map-recycling, some unusual dialogue editing.
is our network score. What's yours? The network score is the average of every country's score 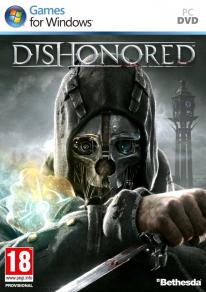