Yet we also watch the same man spurt claret as a knife gashes open his throat. Right now the rooms around are filled with headless corpses and hysterical prostitutes. Yet simultaneously they're also silent save for the booted footsteps of patrolling guardsmen and the whispers of pleasures negotiated for a price.

Arkane Studios is pulling the dual play trick on the audience. One favoured by developers in preview demonstrations to example the multiple ways to complete a mission by tackling the two main divisions; one silent and unexpectedly funny, the other brutal and bloody.

The game's creators are letting the game sell itself, preferring to quietly watch the violence - silent and loud - from the side of the stage. Harvey Smith and Rafael Colantonio, co-creative directors on Dishonored, are exhausted. Unsurprising, given this is the last leg on a whirlwind week of preview events that's seen them tour the globe but see little more than hotel rooms and presentation halls.

How invigorated they were on the other half of the world is unknown. But in London they're letting the game do the talking. Only post-presentation questions that delve further into the world they and the studio have created shaking the bone-deep weariness that comes from prolonged travel.

Not that they need to talk it up. Dishonored manages to speak very highly of itself. You've likely seen the impressive trailer released last week that's more proof of concept than actual gameplay, but manages to evoke the world we'll be living in later this year.

Originally we'd pegged this as potentially the next Bioshock. We were wrong.

Dunwall, the main city that you'll explore, has very unique qualities that do make it feel as distinct as Rapture. Likewise, the unique powers granted your character Corvo, ex-guard of the Empress, framed and disgraced and now on a trail of revenge, do recall Irrational's title, though here possession, freezing time and more are explained away with supernatural, rather than scientific, reasoning.

But from the demo, that sees the assassin work his way through city blocks either by street or rooftop, and infiltrate or dice his way through the Golden Cat Bathhouse, the location for the double kill -
Morgan and Curtis Pendeleton - he's charged with, we can't help think more Thief with Half Life stylisation.

It's not open world. Travel between objectives is by way of boat, and exploration is set within that location's boundaries, though the Bathhouse is one of the smaller areas in the game. Smith describes it as linear missions with non-linear ways of play. You stick to the shadows mostly, leap, climb. Kill or knock out. There's optional side-quests, and eavesdropping can gain you new locations or mission parameters.

Enclosed missions, but wider world repercussions by your choices. There's an ongoing morality play in your actions, the duo hinting at story consequences if you become Dunwall's own Jack the Ripper.

You'll run into different factions. Cycle between using knives, crossbows with multiple arrow types. Encounter two different and warring inventors highly regarded in the city and to both you owe thanks for Elixir buffs to aid you on missions. Skill trees and abilities a handful of which you'll need to specialise; despite the multitude of strange feats Arkane pull off today, you'll only be given a randomised third of the entire total to play with in one play-through.

While Blink, the ability to instantly short-range teleport to any point your reticule is pinpointed on becomes as second nature as walking, it's Possession that'll become a mainstay; the ability to leap into characters and temporarily control them.

It's tempered by a time span inversely proportional to the power level of the possessed. You can linger longer in fish and rats than power-hungry Pendeletons - but long enough to direct your target, say, out onto a balcony and use a concussive blast ability to push them to their death.

Doing so makes the entire incident look like suicide and leaves you free from discovery by patrolling guards. Much like the 'accident' that befell the Pendeleton when he and his hour-long lover were roasted in a steam room, due to us turning the valves outside. After the balcony swan dive that brought chuckles from the audience as they quickly realise what's about to unfold, Arkane takes the leap as well - only to possess a soldier on the grounds below mid-fall, a supernatural shortcut out of the level.

But not before showing us one more power; the ability to summon swarms of rats to distract guards as you make your escape. The thought bubbles that, between the plague gripping the city and your character's terrifying mask, cowled appearance and supernatural aura, whether you'll become a myth, a legend to fear; a living Pestilence. Or at least an unkempt version of Batman.

The uniqueness of the world is aided by the visual work. It's mainstream with just a hint of cel-shading. Characters are realistically shaped and sized. Faces chiseled elegance, features deftly exaggerated to suit this world, not our own, and not the hyper-realism of the trailer. But still interesting.

Morgan and Curtis are all waistcoats and fine tailoring. The multi-storey building's interior a delicate mash of inspirations from multiple eras, but all vibrant and filled with a soft glow. They're likely political scum, the Bathhouse nothing but a high-end brothel, but you can't help but admire the luxury of the visuals.

That admiration favours the outside world as well, from vehicles to ships, and what quickly became the icon of the demo: Tall Boys.

Tall Boys; less sugary American soda pop, more Half Life strider with a steampunk twist. Armoured goons on metallic stilts and shielded shoulder plating cleaning human vermin off the streets in the trailer, and a trio of which make for an ominous ending to the demo as Arkane tackle them in the scorching brightness of storey-high spotlights.

They rightly make for great central art on the six-foot game banners that fill today's demonstration location, yet their menace is hampered by an unnaturally powered-up Arkane's bunny-hopping around their heels. The studio's slashing reachable flesh and trying to temporarily possess one to win; for the sake of the demo the studio has buffed up Corvo considerably. For the observer the sense of fear is sadly diminished.

This was but a small slither of the game, of its rules. Enough to get us to grips with the powers, the play style. The options.

They look fun, engaging. But it's the richness of the world, it's characters, that we're eager to see more of. The type of games Dishonored is attempting to match are so well regarded because the fiction is so believable, immersive. Detailed. We've only caught a flash as quick as a dagger's edge. Dunwall looks to be as dangerous. And as enticing. 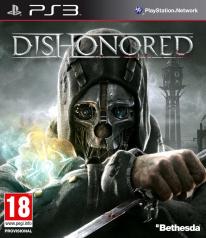