It's no real surprise that Nippon Ichi's Disgaea is hitting new-gen. Since its inception back in 2003 new chapters have been released at regular intervals. Although this new game sports a 5 in its title, those five entries have to be added to the direct continuation of the first Disgaea title (that curiously follows a different numericals), the various spin-offs (Makai Kingdom, Prinny), the visual novels (Disgaea Infinite) and the reissues of the four previous major games for different handhelds (PSP, DS, PS Vita). If we add them all up we're at the fifteenth Disgaea game. Perhaps the most surprising thing is that the gameplay does not give the slightest sign of exhaustion.

One possible reason for this might be the Disgaea universe and setting, and its casual style and strong sense of humour. Additionally, developers experiment and mix things up in the spin-offs, switch around the main characters for the main entries, appeal to nostalgia by retelling the adventures of the best known heroes... That knack for identifying what will satisfy fans has ensured that the franchise continues to do well twelve years and fifteen releases later. This may not have the production values of big budget triple-A releases, nor is it a game that will sell PlayStation 4 consoles. Disgaea 5 is a title with a clearly defined audience, a group of players who know what to expect and that is a very particular kind of game with a very unique style.

Alliance of Vengeance retains every one of the elements that have made the franchise great thus far. There is a new war raging in the demonic underworld; after the new emperor came to power there are many demonic lords who want to kill him to avenge the damage done as he rose to power. However, it should be noted that the story, as in every Disgaea game, seems more serious at first sight than it actually ends up being, because this franchise is known for its casual humour, it's a light-hearted and entertaining style. In this new chapter, these hallmarks remain, just as the gameplay follows the guidelines to which we are accustomed in the franchise. It is a strategy-RPG where you have to place party members strategically to be able to overcome increasingly complex levels full of enemies.

Although the game is pretty much identical to its predecessor in most regards, there are some small changes that add some innovation to the franchise such as new character classes, combined skills and a new special attack called Maougis. They're small nuances that stand out as early as the tutorial, itself a quick reminder of all of the enduring mechanics. In fact, coming from such a long-running franchise causes the feeling that the game assumes that the user already knows what to do. Thus newcomers may find things a tad complex. It's not impossible to overcome, but it is noticeable.

In short, Disgaea 5: Alliance of Vengeance is a new entry in the series and you can tell exactly what it is by both by its familiar gameplay and by its sense of humour, its atmosphere, and its levelling system... but also as a result of its technical foundation. While all this is very positive in terms of the game being able to succeed just as it has in the past, it's also a significant burden and one of its biggest downsides. Disgaea 5 recycles many things from previous instalments, both in terms of assets to create stages, and in terms of ideas. Of course, characters are recycled too. Almost everything we see on screen is reminiscent of the previous chapters, even of that first Disgaea from twelve years ago. All the time that has passed since then demands more risk-taking or perhaps a greater effort to expand on its foundations, rather than just offering high definition sprites that are pleasant visually, but blocky surroundings, or characters who always move across the horizontal plane with animations identical to those found during the PS2 era.

There's no denying that PS4 is perhaps not the ideal canvas for something like Disgaea 5: Alliance of Vengeance, which by its nature would have found in an ideal habitat on the PS Vita, like Disgaea 3 and Disgaea 4 before it, themselves games that were a better fit on handheld than on home console. This decision to go for a new and powerful platform (we fully expect a handheld version at some point in the future) can actually do disservice to a game that, while it has a lot going for it in terms of gameplay and story, remains anchored in a past. It's a pity, because the Disgaea franchise holds a great deal of promise and potential to surprise new players, because it has pulled the clever trick of having gameplay that's just as current now as it was twelve years ago.

Gamereactor UK
+
The concept still remains fresh and current, Great humour, Lots of customisation options, Entertaining.
-
Doesn't feel at home on PS4, Some experience with previous chapters is recommended.
is our network score. What's yours? The network score is the average of every country's score

"It has pulled the clever trick of having gameplay that's just as current now as it was twelve years ago."

Disgaea 5 Complete is coming to PC

And it's coming in a month's time.

Will be available in Europe starting from October 16.

Disgaea 5: Alliance of Vengeance coming to PS4 next fall 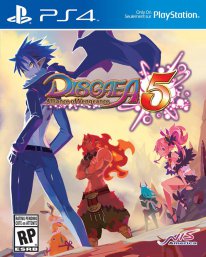