Codemasters has released a new update for their Early Access rally game Dirt Rally. The game has been updated to version 0.8 and this patch adds brand new stages and vehicles. This time we head north, as the update brings 12 stages from Finland into the game. They are set near the region Jämsä and are among the fastest stages in the game, with average speeds exceeding 160 kph. The two new vehicles are Subaru Impreza 2001 and Ford Focus RS Rally 2001.

These are not the only new additions, as the developers have added mouse support, custom championships and more to the game. There are also numerous fixes. You can find full lists to these under the new trailer and screenshots. The video shows some speedy racing with the colours of ruska glowing in the trees.

New content:
• 12 new rally stages near Jämsä, Finland
• All new 2000s vehicle class
• 2 new cars - Subaru Impreza 2001 and Ford Focus RS Rally 2001
• Custom Championships - You can now tweak the number of events, stages and AI difficulty. This will mean that you can set up an event that suits the amount of time you have available and get rewarded accordingly.
• Mouse Support! - Yep you asked for it so here it is. It's still a work in progress so please give us your feedback on how we can improve it.
• We've reworked the handling on our 60s, 70s, 80s RWD and 2010s classes - these changes have seen improvements to the way we model suspension and tyres, along with engine and aero rework they really make the cars feel a lot more dynamic to drive.
• We've updated the engine audio for the 1995 Subaru Impreza in the Group A class. We'd like to say a massive thank you to Ryan Champion for letting us use his awesome car for the recording!
• We've wrapped our replays so you can rewind from the start of a replay to watch the final section of your run much faster than you could before.
• We've added a new 'Invite Friends' option in the lobby to make it easier for you to get the people you want into your PVP races.

The fixes:
• The audio FX levels for the surfaces and kick up have been brought back so that you can hear all that gravely goodness.
• We sent our Rallycross AI drivers to the opticians so that they can now see when they need to avoid other cars when they are approaching the joker entrance.
• Now that they can see better they are also setting faster laps.
• We've fixed the camera clipping in certain camera angles when you changed the Field of View.
• We've made some Hyper threading fixes that should now prevent those annoying stuttering issues that some of you were having.
• We've stopped the Engineer contract lengths and costs from being affected when competing in league events.
• Toggling Push to Talk or enabling/disabling voice communications through the pause menu is now actually working.
• The Reset Timer has now been increased to 15 seconds when attempting to get back on track. I know we said that before but this time it is actually in.
• Cars will no longer roll over on the start in PVP races, ROFL.
• We've made sure that the cars are visible on the start line even when collisions are turned off in PVP - they will still ghost during the race though.
• Your PVP opponents won't be showboating and driving around with the handbrake on anymore.
• The gear setup will no longer be changing between stages without a service area.
• We've fixed those odd camera angles that were being used in spectate mode.
• The miles driven using owned vehicles in PVP now accrue towards unlocking upgrades for that vehicle.
• When viewing a replay using an interior camera, the speedometers now show the correct speed for all vehicles.
• We've fixed a whole host of other stuff too but they were too boring to call out in this list.

Dirt Rally on PS4 & Xbox One

"Dirt Rally is the absolute number one rally game currently available on PS4 and Xbox One."

"It's the most realistic rally game of all time."

Dirt Rally VR out today as DLC for PlayStation VR

Or it comes included if you buy the game at a special promotional offering.

Includes the base game and a few other goodies.

We're feeling the need for speed.

We grabbed our racing wheel, destroyed our beautiful Mini Cooper. 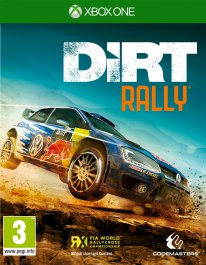