"It's more than just a worthy sequel to both Dirt 3 and Dirt Rally, it's a true masterpiece."

The Dirt World Championship wrapping up on Saturday

Volkswagen R will sponsor the final.

The man from Codemasters wants pro racers to go digital in the off-season.

When is the FIA World Championship winner joining Dirt 4?

We talked to EKS at the FIA World Rallycross Championship at Hell in Norway to find out.

We hit the road to try the racer.

We hit the road with the racing wheel, and have some gameplay clips to share.

We hit the track, skidded some corners, and came out unscathed.

Dirt 4's newest trailer tells you to Be Fearless

We also get a glimpse into the soundtrack.

It's an attempt to merge Dirt 3 and Dirt Rally, but how does it handle?

Dirt 4 announced, and it's not far away

Or was it simply a case of a finger slipping?

DiRT 4 will be more rally orientated 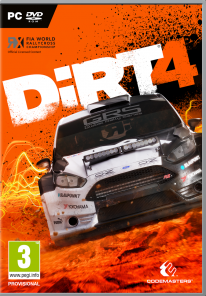