Bandai Namco have released a number of screenshots of the upcoming PlayStation 4 version of Digimon World: Next Order (the Japanese build, that it). The gallery includes shots of Gabumon, Imperialdramon, Veemon and more digital monsters.

The PS4 version of Digimon World: Next Order will have several upgrades and additional content that wasn't in the original release. The PS4 version will have better graphics, changes to the games balancing, a number of new story events and more Digimon to train.

The previous Digimon game, Digimon Story Cyber Sleuth was well liked by both game critics and fans and sold rather well.

Digimon World: Next Order is scheduled to release on PS4 in early 2017, after initial release was originally planed for late 2016. Are you excited for a new Digimon game or are you more of a Pokémon fan? Let us know in the comments.

Jake jumps into the studio for the latest instalment.

Digimon World: Next Order has a release date

And there's an exclusive interactive activity to take a look at.

Kazumasa Habu explains that they want to release more titles over here. 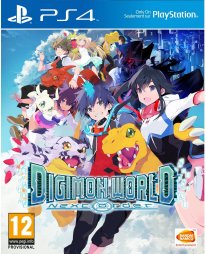