Tomonobu Itagaki is not your typical Japanese developer. He says things like: "I have only added things that everyone likes such as violence, flowers, children, women, friendship and death." He doesn't hold anything back, something that often steers him away from politeness. In fact, he's very convinced of what he does and rarely restrains his imagination. At first glance, it seemed strange that his new project is appearing exclusively on the Wii U. But for those who have followed the moves of this eccentric designer through the years, this decision is probably less surprising. In fact, he has previously praised the Wii U as a special and innovative console.

Devil's Third is a third-person action-adventure that has some parallels with Itagaki's Ninja Gaiden series. It combines hack'n'slash with shooter elements and, of course, there's plenty of blood to be spilled. The background story is very interesting, it's based on the Kessler syndrome. According to this theory, out of control old satellites spinning around the planet will eventually end up in low orbit collisions. The consequence of this is a chain reaction in which almost all other satellites are affected, thus prompting the failure of civilian and military network technology.

The world of Devil's Third descends into chaos after such a disaster. Oil is the most important resource and warfare is fundamentally changed by the event. Without satellites combat quickly regresses to a state last seen during World War II. A terrorist group, which is not entirely unknown to our main character, hopes to profit from the chaos. And our hero, who has actually been imprisoned in Guantanamo Bay for years, is being asked by the government to help.

Ivan is a powerful, fully tattooed bald man with who wears the same kind of sunglasses as Itagaki-san does himself. In close combat he relies on changing weapons, switching between things like pipes, katanas, hammers, and machetes. When fighting at range, there's another varied repertoire of options, with firearms ranging from machine guns and deadly sniper rifles through to explosive rocket launchers.

While we travel the world and play the story the game races from set piece to set piece, but the narrative style remains surprisingly calm. Despite exaggerated action, extreme situations and wicked enemies like those you'd see from a game by Platinum, Devil's Third is surprisingly realistic. It may not be the most convincing game, visually speaking, but the presentation doesn't feel cheap or tacky. It's a very well thought out roller coaster ride, where almost every moment fits.

This is quite surprising because one might not expect this from a game such as this. However, it probably has something to do with the fact that Itagaki wanted to create a world in crisis in which there are limits, where the situation doesn't feel completely outlandish. At least this much is true for the overarching scenario. Many opponents and some of the set pieces are still exaggerated, but it's more inline with what you might expected from James Bond or Uncharted. Whether we use our knife to cut off various body parts, or make heads explode with gun in-hand - the game is never squeamish. For close combat, there's a nice combo system with brutal finishing moves and special abilities, as well as the shooter sections that offer a simple cover system that works well. In-between we're handed small tasks that provide some variety. It's worth noting that the AI sometimes felt a little bit stupid.

Then there's the mysterious multiplayer mode, in which we experience the effects of the Kessler syndrome in North America and fight with factions for supremacy. Up to 16-players battle in different modes that are based on Deathmatch and Capture the Flag. There are numerous ways to personalise your experience, and there's also funny modes that move away from the serious tone found elsewhere. For the big battles it's even possible that you don't join either of the two teams, but fight alone as a third faction - probably the option Itagaki-san would advise you to play if you wanted to have the most fun.

Originally Devil's Third was in development for PlayStation 3 and Xbox 360. It's the first game from Tomonobu Itagaki's own company, Valhalla Game Studios. Interestingly it was one of the projects that was affected by THQ going bankrupt. While it nearly went away as part of the publisher's collapse, Nintendo secured the rights and announced the game last year as a Wii U-exclusive. Without Nintendo Devil's Third may have been scrapped. It's an unusual work, that much is true, but if you like the Ninja Gaiden series and have a soft spot for over-the-top hack'n'slash shooter action, you may well like it. So far it's shaping up to be a rather interesting game - and it certainly stands out from the crowd. 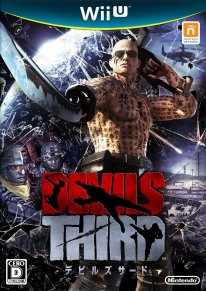